Rotary International started with the vision of one man — Paul Harris.

The Chicago attorney formed the Rotary Club of Chicago on February 23, 1905, so professionals with diverse backgrounds could exchange ideas, form meaningful, lifelong friendships, and give back to their communities. 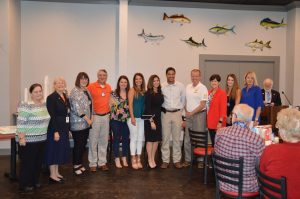 Rotary’s name came from the group’s early practice of rotating meetings among the offices of its members.

Rotary is based on three P’s, according to John Hathaway: Peace, participation and polio eradication.

“We carry out service projects that enhance economic and community development and create opportunities for decent and productive work for young and old. We also strengthen local entrepreneurs and community leaders, particularly women, in impoverished communities,” according to its official website.

“Because of Rotary, 2.5 billion children have received the polio vaccination worldwide,” Hathaway said. “The reason we are here today is honor 100 years in Orange.”

Hathaway referred to the historical marker in Stark Park of the Rotary emblem. Lutcher Stark started Rotary here in Orange which chartered in 1919.

This past year, under the direction of no Past President Natasha Garrett, the club hosted its first Crawfish Boil. It was considered a success and the second annual Crawfish Boil will be held at a yet to be announced date.

As part of changing with the times, and moving forward, the organization is making some changes to its meeting times and places such as Cocktails on the Patio at Reel Cajun at 4 p.m. on September 13.

“After all, this is not your grandfather’s Rotary,” President Ida Schossow said.

Local dachshund to run in Wienerschnitzel Wiener Nationals in July