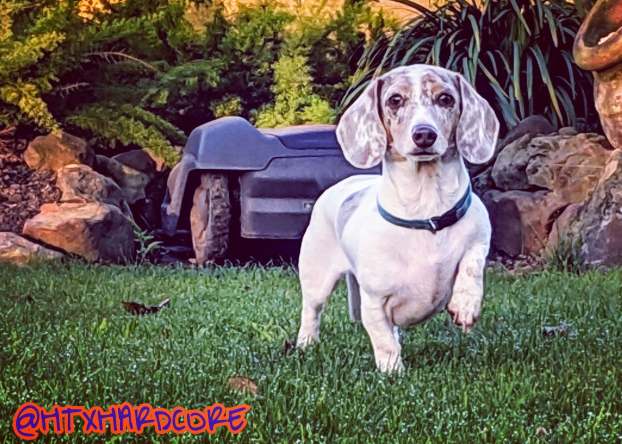 Local dachshund to run in Wienerschnitzel Wiener Nationals in July

As a puppy, Murphy showed a love for racing.

Kristi Hinds, Murphy’s human, told her to wait until she was older. Now at three years old, Murphy is living the dream.

In a race to benefit the Seal Beach Animal Care Center, Kristi Hinds and Murphy will participate in the 24th Annual Wienerschnitzel Wiener Nationals on July 20.

Hinds was recently asked, and granted permission, to use their photo in promoting the upcoming event.

Promoted as The Race Where the Wieners Run Wild, according to the official rules, only genuine, low-to-the-ground Dachshunds (Real Wiener Dogs) will be allowed to race.

Hinds received a message on June 14 concerning Murphy being selected for the race.

“One out of 100 wiener dogs were chosen to participate,” Hinds said.

This will not be Murphy’s first race.

Buda, Texas has a population of approximately 7,200 and is 282 miles west of Orange, Texas.

Not only does Murphy race, she is also an ambassador for a Texas based company for natural products for animal care, Natural Dog Company.

“We would love to promote our hometown area as much as possible,” Hinds said. “My family has had A-1 American Fence in Orange for over 50 years. We all work hard for our community.”

Hinds added she would love to see something like this here in Orange.

To The Leader The West Orange-Cove CISD Board of Trustees has approved a $3,000 minimum pay increase for teachers. The... read more