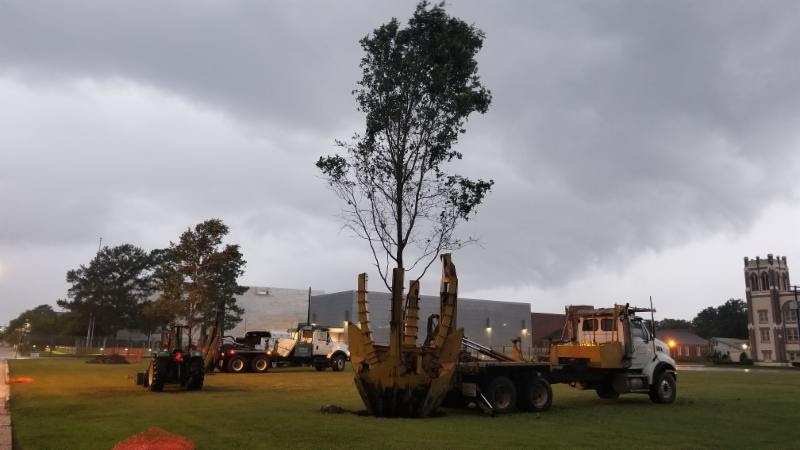 Photo courtesy of the Stark Foundation New Southern Live Oaks are being planted along Green Avenue to promote a sustainable future for trees in downtown Orange.

Southern Live Oaks (Quercus virginiana) are among the most majestic and stately trees found in the southern U.S.

While they grow in the forests and landscapes of the low country from southern Virginia to Gulf Coast Texas, the epicenter of champion Southern Live Oak trees are the southern Parishes of Louisiana. The oldest and most extraordinary species are more than 1,000 years old with canopies well over 100 feet wide.

Most importantly, though, these trees have survived the rigors of heat, rain, hurricanes, and more for hundreds of years to attain near legendary status. The adaptability of these trees makes them the perfect trees for our Gulf Coast communities where the soils are heavy, rainfall is abundant, humidity is high, and occasional severe storms with wind are likely.

Thanks to the efforts of Bob Thibodeaux, founder of Bob’s Tree Preservation in Church Point, Louisiana, some of the seedlings he has carefully reared over nearly 20 years are now growing in Orange, Texas to enhance the beauty of the downtown and revitalize the tree canopy with next generation of shade trees.

With support and donations from Thibodeaux, the Stark Foundation has planted several impressive specimens along Green Avenue to promote a sustainable future for trees in downtown Orange. In early June, Southern Live Oaks ranging from 25 to 35 feet tall with 100-inch wide root balls, weighing nearly 15,000 each were planted on Stark Foundation properties. Over nearly a week, trees arrived from Church Point, LA and were carefully planted in their new homes.

The trees planted along Green Avenue have a lofty lineage, having been grown from acorns harvested from some of Louisiana’s finest Southern Live Oak Trees.

Two of the trees are seedlings that originated from the Jim Bowie Live Oak, located across the street from the St. Landry Parish Courthouse in Opelousas, Louisiana. This Southern Live Oak is found near the home of the famous pioneer Jim Bowie.

Thibodeaux collected seed from this tree because he believes it to be one of the finest live oaks for its overall health and foliage. The tree is estimated to be more than 300 years old. The other two Southern Live Oaks planted along Green Avenue are seedlings from Jefferson Island (formerly Orange Island.), west of New Iberia, Louisiana.

Found at the home of actor Joseph Jefferson, now part of Rip van Winkle Gardens. Jefferson named the tree in honor of Grover Cleveland who visited him in 1892. The tree is estimated to be 550 years old.

Thibodeaux thinks that the seedlings from this tree are among the most vigorous of any live oaks he has ever grown.

Collectively, the Southern Live Oak trees planted in downtown Orange, Texas represent a major financial commitment to the community. One day, these trees may become giant specimens around which local legends arise; though, it will be far beyond our lifetimes. Most importantly, though, they are intended to be living symbols of the Stark Foundation’s commitment to creating a more beautiful and sustainable future we can all celebrate.