Stephen Louviere III, an Evadale High School graduate, was awarded $2,000 Vocational Scholarship as well as a President’s Award from the union. Louviere plans to join I.B.E.W. Local 479 as he works towards his goal of owning his own business as an electrician. 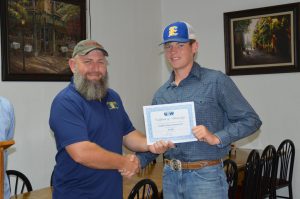 Caden Browning, a Deweyville High School graduate, was awarded a $1,000 Academic Scholarship and a Certificate of Excellence. The scholarship will help bring him one step closer towards his plans for a medical career. He will attend LeTourneau University in the fall. 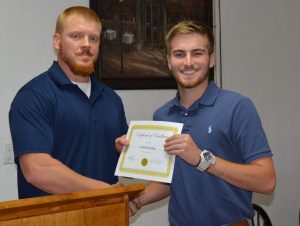 The union voted to start the scholarship fund a year ago as a way to help out locally.

“We have donated to the national scholarship when Steve [Louviere Jr.] and Josh [Aldridge] asked ‘what about our local’?” USW President Gary Gordon said. “I was all for it.”

Gordon added the local union was actively involved with many ways to help better the community.

“It is a great opportunity to help out,” Scholarship Board Member Josh Aldridge said. “I did not have to even think twice. A little help goes a long way, especially the parents.”

Seeing an opportunity to do give back to the community is one reason Scholarship Committee Chairman Stephen Louviere Jr. made a suggestion for the union to have a scholarship fund.

“These young men applied and worked for these scholarships,” Louviere said. “I am proud of what they are doing and overcoming overwhelming situations. They are making bigger strides todays.”

Fun, fireworks and music for the 4th of July celebration

By Dawn Burleigh The Orange Leader The City of Orange has announced the 2019 4th of July Concert and Fireworks... read more