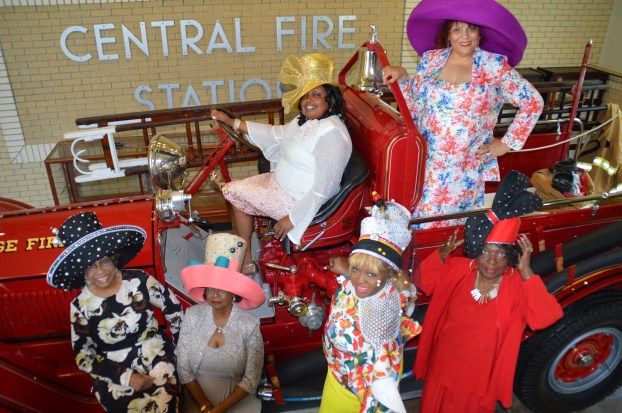 Dawn Burleigh/The Orange Leader Bettie Curtis, left front, Victoria Wilridge, Debra Lockett, Jean Gibbs, with Anitrea Goodwin, left top, and Wythel Price, while at the Orange Central Fire Station, give a sneak peak at the exciting fashions and hats which will be featured at the 2019 Summer Hat and Fashion Show at 4 p.m. Saturday, June 29 at 1113 North 2nd Street in Orange.

If you missed the inaugural fashion show, a second chance to see local models rock the runway is here.

Forty Plus Models Fashion Show, of Houston, is returning to Orange with a Summer Fashion and Hat Show at 4 p.m. Saturday, June 29 at 1113 North 2nd Street in Orange.

This year, the event will include male models during the Hat Show section of the event.

Last year, not only did Debra Lockett, President/CEO of Callie Lewis-Watson and The Forty Plus Models, Inc., bring the latest in fashions for women with curves, she also brought a fast and upcoming hat designer, John Williams.

Williams, of J. Henley Couture, is inspired by the big hats he would see in church, he said after the show last year.

Lockett, while MCing the show, offers fashion tips to get the most out one’s wardrobe.

Lockett, with Wythel Price, formerly of Orange, are helping coordinate the event here in Orange.

The purpose of the organization is to sponsor and promote fashion shows designed to improve the image of mature women and men as well as to provide scholarships for the “average” high school senior and to support leadership and awareness within the community.

The event is free to the public. Offerings will be accepted but not required to attend.

Refreshments will be served during the show.