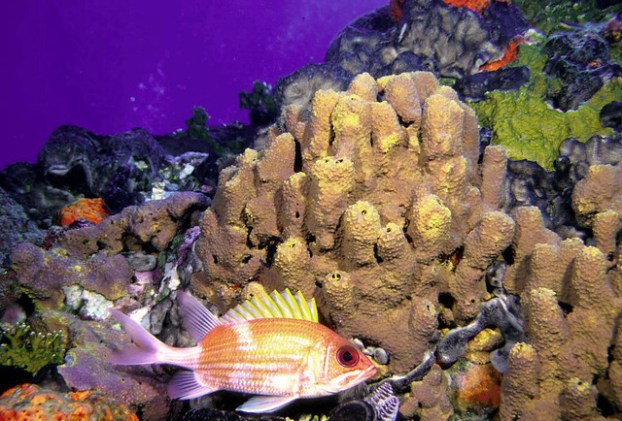 Projects are under development to restore and protect deep-sea habitat and coral reefs such as the Flower Garden Banks Reef off the Texas coast in the Gulf of Mexico. (Flickr)

GALVESTON, Texas – Almost a decade after the 2010 Deepwater Horizon oil spill, government agencies are still spending millions of dollars to restore the Gulf Of Mexico.
The Open Ocean Trustee Implementation Group is planning to spend about $130 million over the next seven years to study, restore and manage deep-sea habitat, including coral communities in the Gulf.
Sandra Brooke – a deep-sea coral scientist, and a member of the associate research faculty with the Coastal and Marine Laboratory at Florida State University – says the project aims to restore damaged habitat for fish, sea turtles and other inhabitants of the ocean’s middle and lower depths.
“We’re trying to identify areas that are not in conflict with any existing fishery, but are extremely valuable in terms of conservation so that those areas will be protected,” says Brooke. “So, if and when whichever fisheries it is start moving into the deep sea, at least we have those valuable areas protected.”
Public comment is being taken about the plan through the end of June.
Another group, the Gulf of Mexico Fishery Management Council, recently approved a first-of-its-kind plan to protect 21 coral sites, covering 484 square miles, by restricting damaging fishing gear near the reefs. The plan will safeguard ancient, fragile coral ecosystems that provide food, shelter and breeding grounds for species that range from sharks and crabs to snapper and grouper.
Holly Binns – director of Conserving Marine Life on the Gulf Coast and in the U.S. Caribbean for The Pew Charitable Trusts – says once the coral is gone, the damage is almost irreversible.
“Unfortunately, once these deep-sea corals are damaged, they’re very fragile and they can take decades or even centuries to recover,” says Binns.
Binns says an extra benefit of these restoration plans is the development of better maps to locate coral reefs and other ecosystems in the deep ocean.
“A lot of our ocean has yet to be mapped, and it’s only in the last 10 or 20 years where the technology has been good enough to allow scientists to get into these very deep waters,” says Binns. “Using remote operated vehicles and submersibles, they are now able to get down into the deep ocean.”
Restoration projects are funded through a $20 billion settlement fund with BP, the oil company that owned the Deepwater Horizon rig.

Comments for the deep-sea habitat restoration project can be made by letter or online with the U.S. Fish and Wildlife Service. A comment period for the project to identify and protect coral reefs is expected to open in July or August.

By Eric Galatas Texas News Service   AUSTIN, Texas – After more than a decade of progress getting health coverage... read more