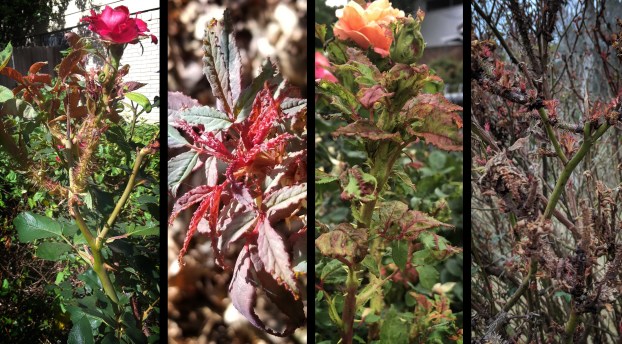 A comprehensive national effort among 30 industry and academic entities led by Texas A&M gains ground in the battle against rose rosette.

The team has tracked the disease across the U.S., developed new diagnostic tools and expedited breeding with hundreds of new molecular markers.

The disease has claimed an estimated $40-$50 million in rose industry losses alongside thousands of jobs, researchers said.

Pathologists have verified more than 2,100 rose rosette occurrences in about 30 states through user photo submissions to the website so far.

In Texas, the rose rosette is most highly concentrated in a few northern counties around the Dallas-Fort Worth area. Meanwhile, states across the Midwest from Kansas to Maryland comprise the densest affected U.S. regions. 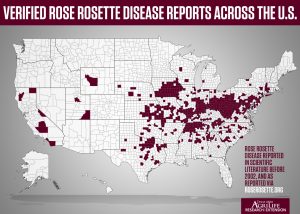 Researchers continue to test an array of genomic tools they’ve developed since 2014 to verify reported rose rosette. The group’s plan – along with the renewal of their U.S. Department of Agriculture grant in 2020 – is to produce a serological test, which functions like a home pregnancy test for rose rosette in the field.

“These are tools that could be used for consistent, economical rose rosette confirmation,” Ong said.

This would lead to quicker determinations on rosette presence and more time for growers to plan interventions. But once the virus is detected, understanding how to proceed presents its own challenges.

The initiative’s virology team, led by Dr. Jeanmarie Verchot with Texas A&M AgriLife Research in Dallas, seeks solutions to rose rosette from clues about its underlying mamavirus. The team seeks to capture the virus in field plots at Dallas and to clone it for observation under greenhouse conditions.

“Very little is known about the mechanisms of this virus and how it interacts with plants,” Verchot said.

Among her team’s duties is reconciling varied reports on the virus’ genome size and complexity. They will explore gene segment counts, symptomatic effects of each segment on rose plants and the effects of combined segments.

“We want to know, ‘how is the virus stopped by resistance mechanisms in plants?'” Verchot said. “‘Do they block the virus replicating itself, or block it from ever entering the vascular system? How does the virus interact with the plant?’ We’re at the beginning of all those experiments now.”

In another aspect of the rosette initiative, entomologists seek to control populations of the eriophyid mite Phyllocoptes fructiphilus. The arachnid is currently known as the sole distributor of the virus among roses, and entomologists are seeking vector-control methods beyond excessive, expensive miticide application.

Still, he said, any mite control measures will need to be bolstered by naturally resistant plants.

About 3,000 markers are now identified, compared to roughly 150 at the grant’s beginning. The new markers are unassociated with rose rosette. But based on other traits they represent, they allow researchers to weed out 50 percent to 75 percent of seedlings as poor candidates early in horticultural greenhouse trials.

“By the time I actually get to field trials, I’ve saved about 90 percent of the work,” Byrne said. “New technology can up that number even further.”

“We want to dissect what resistance and immunity really is at the molecular level,” he said. “We want to get usable markers that we can demonstrate in action to breeding companies.”

His team plans to implement field spectral imaging to detect pre-symptom responses to rose rosette. They also seek better screening techniques off the field; insights into environmental characteristics of the vector eriophyid mite; bolstered reporting of rose rosette to the national website.

“This is ongoing research, so new discoveries can influence and change how we approach rose rosette disease in the future,” Ong said.