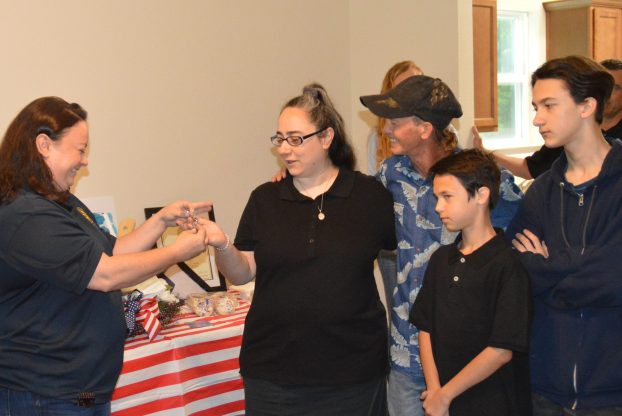 Dawn Burleigh/The Orange Leader The Thibeaux family did not allow a little rain to dampen their mood as they accept the keys to their home, newly rebuilt, after Harvey flooded their house in 2017.

Family can return home after Harvey

Thanks to the Texas General Land Office (GLO) Community Development and Revitalization team and Brizo Construction, Troy and Esther Thibeaux with their sons, Solomon, 15, and Joseph, 12, are finally able to have a house to call home again on Wednesday.

GLO Community Development and Revitalization team presented the family with the keys to their new home, much to the joy and excited of the family.

From groundbreaking to key-giving was 30 days according to a Brizo Construction representative.

“We were slowed down by the rain,” he added.

The family agreed they felt more secure in their new home with its higher elevation.

“We lost our home during Rita, Ike and then Harvey,” Esther said.

“We had to start all over again,” Troy said. “Just have to hang in there.”

Their sons were excited to each have their own rooms now, despite having to wait two-three weeks for furniture.

Orange County Disaster Rebuild is assisting the family with furniture. 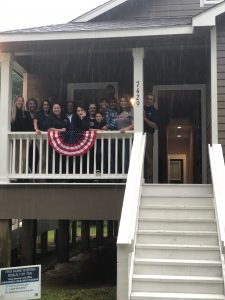 Esther said the program which assisted in making a dream, a wish a reality was beneficial for them.

“We filled out the paperwork and followed all the steps,” Esther said.

The surprise came when they discovered they were getting more than they had hoped for.

“We expected to get the house repaired,” Troy said. “They built us a house. Now we can all move forward.”

The family was residing in a travel trailer on the property while trying to recover from the historic storm.

Solomon, their son, said the house was pretty nice.

“They did such a beautiful job,” Troy added.

With the higher elevation, a ramp was added to the side of the house to the back door to add ease for the grandparents to visit the children.

“It would break our hearts if our parents could not come over to visit their grandchildren,” Esther said.

Individuals affected by Hurricane Harvey may qualify for assistance through the Texas Homeowner Assistance Program if they owned their home, it was damaged or destroyed by Hurricane Harvey and it was their primary residence at the time of the storm, among other eligibility factors. The program offers qualified homeowners assistance to repair, rehabilitate or rebuild homes damaged by Hurricane Harvey. Applications will be considered for award on a first come, first served basis, according to the priorities outlined in the Regional Housing Guidelines.

Husband receives kidney from his wife on anniversary

By Eric Williams The Orange Leader   This year’s anniversary and Memorial Day was quite different for the Davis family... read more