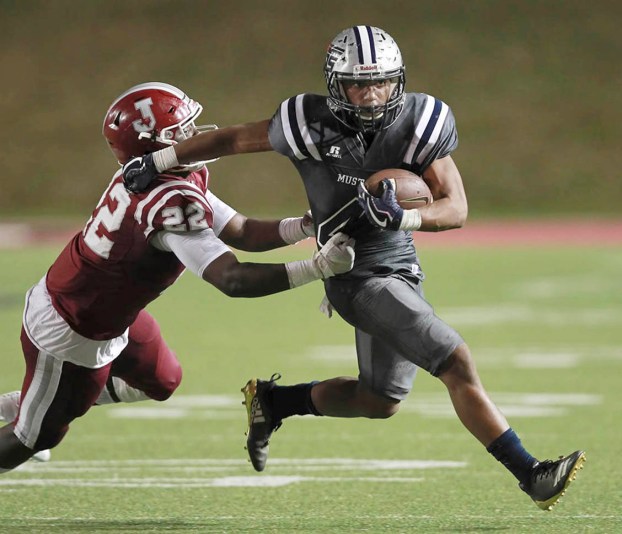 Mark Pachuca/Orange Leader WO-S back Elijah Gales shrugs off a Jasper defender in the third round of the playoffs last season.

WO-S ranked No. 5 in Campbell 4A D-II state poll; behind Jasper, Silsbee

The West Orange-Stark Mustangs, who went to four straight Division II State Championship Games, including winning two state titles in 2015 and 2016, are ranked No. 5 in the 4A Division II poll.

The Mustangs, though, will have two 4A Region III teams to deal with this upcoming season that are ranked ahead of them.

The Silsbee Tigers are ranked No. 3 while the Jasper Bulldogs chime in at No. 2.

The Mustangs split with both teams last season.

WO-S defeated Silsbee in District 10-4A Division II play and went on to win the district title but fell to the Tigers in the Region III Finals.

The Mustangs dropped a decision to Jasper in non-district play last season but went on to defeat the Bulldogs in the third round of the playoffs.

The Mustangs will play the Bulldogs and Tigers in back-to-back weeks to start October. WO-S welcomes in Jasper Oct. 4 in their last non-district tilt and will venture to Silsbee to open up 10-4A play Oct. 11.

Here are the Campbell preseason polls.