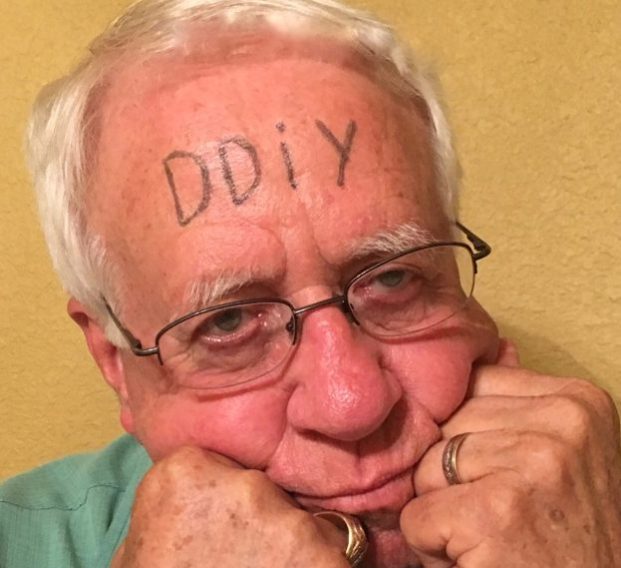 THE IDLE AMERICAN: DIY in my rear view mirror

Warnings abound concerning the danger of saying “never again.” Most of us are guilty of making false promises on topics such as New Year’s resolutions, diets, and exercise.

I’m ready, though, to admit past failures, place my right hand on a Bible stack and gaze heavenward for this solemn pledge.

Never again will I stumble into muckety-muck traps that heretofore have snared me with tempting DIY (do it yourself) lures. Nor will I fall for come-ons like “any child can do it,” or “some assembly required for completion in four hours.” Horse feathers!

I have abandoned memories that should have kept me in my place.

I once mistakenly attempted to construct a wrought iron fence and adjust the tension on a double garage door. I tried to empty a hot water heater with a shop vac, which I had confused with a wet vac.

My current “boondoggle”–in “pause mode”–might have been avoided had I tattooed “DDIY” on my forehead.

The mirror could have reminded me with every glance: “Don’t Do It Yourself.”

Owner of wonderful new battery-powered mower and lawn tools, I recently checked on options for an outdoor shed.

I looked both at Lowe’s and online. Lowe’s pledge, “Let’s build something together,” still rings in my ears.

Before I claimed Lowe’s offer, my mercenary nature took over.

Online, Grainger offered the small shed needed for a mere $288, and the order was quickly placed by phone. Fate took over when I attempted to change the delivery date, utilizing the website chat line. Attempted “chats” didn’t work. Later, in a phone conversation, my credit card was said to be invalid, never mind the purchase via credit card already had cleared.

They also thought I had purchased some industrial item unrelated to storage sheds.

I don’t want to believe that the Chinese sending shed parts to the United States are angry with us because of recently-imposed tariffs, but I’m not so sure. The big box included a jumble of parts, and something of a “one size fits all” set of instructions printed in multiple languages and intended for use with the construction of several shed models. (Also, many parts were coated with sticky Saran Wrap, with part numbers printed on the wrap rather than the part.)

Additional frustration–traced directly to myself–arose with the discovery that the shed DOES NOT include flooring. (I failed to mention that freight cost was almost half as much as the purchase.)

There has to be a floor, of course, so I’m left with two options–concrete or pier beam foundations.

Nincompoop that I am on challenges well above my pay grade, I chose the latter. What a “piece of cake,” I thought.  Even I should be able to dig four 15-inch pier holes, to support a plywood floor on a frame made of two-by-sixes.

The required depth was only 15 inches, but I failed to consider that sprinkler system lines are buried only eight inches underground.

After digging one-half of the first hole, I hired a neighborhood kid to dig the remaining three and a half holes. On the post hole digger’s final stab, a water line was discovered.

Actually, it was punctured. A plumber fixed it for a figure south of $200. Granddaughter Addison and grandson Kedren, both 12, helped with the frame and flooring, but we all were “bumfuzzled” by the screwy instructions.

We were misty-eyed. Metal sheets, screws, hinges and lumber scraps left asunder are testaments to my futility. I voluntarily went to my corner–dunce cap on–wondering how much more money and heartache lie ahead on a project that has already topped $1,000. I’ve only a floored foundation to show for it. Unless you are a proven “DIY”er, think on these things.

My take on the Mueller Investigation

J David Derosier Readers should recall my thoughts on Metrics and Accountability from previous articles. As you know, I feel... read more