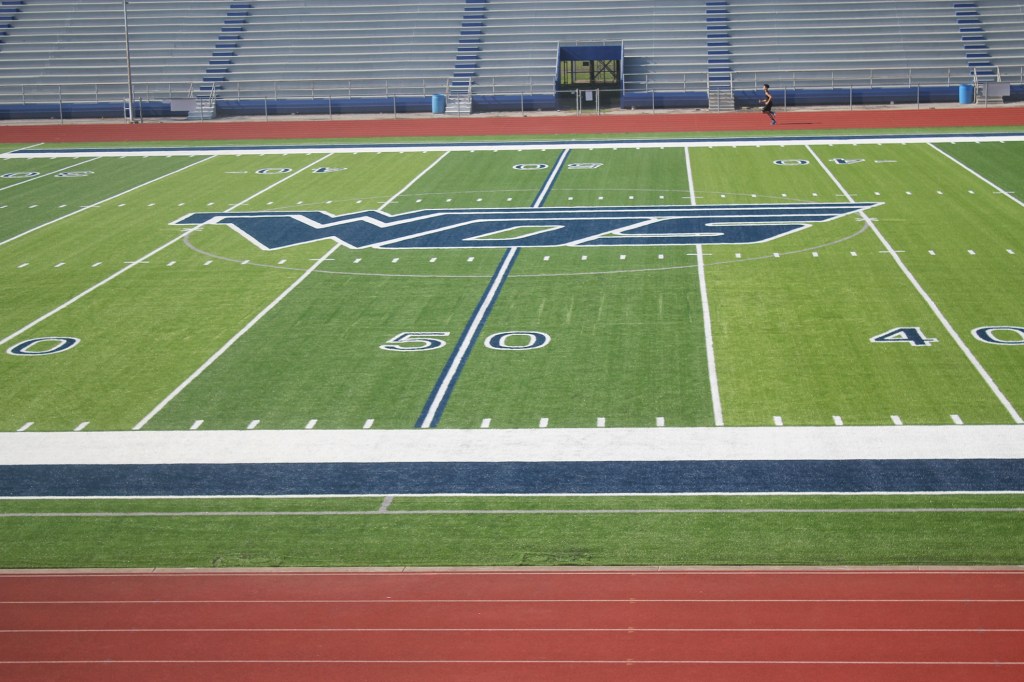 Van Wade/Orange Leader The turf at Hooks Stadium and Breedlove Field has recently been completed as the Mustangs anticipate the upcoming 2019 season.

It’s been such a long time coming for the state of Texas’ most winningest football program in West Orange-Stark.

It’s official, the turf at Hooks Stadium and Breedlove Field is ready to be challenged as players look to get their first tests on it this week.

What program in the state deserves it more? After all, the Mustang football program owns a 406-98-3 mark since 1977, making its .804 winning percentage the best all-time in the state.

“It has been such a long time coming for sure,” said Mustang Athletic Director and head football coach Cornel Thompson. “We’re so thrilled for the community and the players. It’s definitely something to be proud of. No more sloppy, nasty, wet field to play on, and bless our maintenance crew over all these years, they did their very best to keep it up. This field will make their lives much easier.”

The WO-S graduating class of 2019 tested the turf field with flying colors at their graduating ceremony last Friday.

“They are still ironing out a few kinks here and there,” said Thompson. “The kids have been just chomping at the bit to get out here on it and hopefully we can do that this week. Get out here and toss the ball around some.”

Not only does the field look sharp, the rest of the stadium glistens as it received a new paint job on both sides of the stadium with silver paint and shiny blue trim. The goalposts are brand new along with the pads wrapped around each one of them. A new large jumbotron scoreboard will be installed prior to the 2019 season cranking up.

“The field looks tremendous with it saying Mustangs in both end zones and that flying WO-S in the middle of the field is big, just like I Like it,” said Thompson. “The alternating light green and dark green on the field adds to it and it looks great. We’re looking forward to getting that big scoreboard with the jumbotron that will be similar to Texan Drive Stadium over in New Caney.”

The pressbox will remain the same just for next season.

The new event center will be constructed in the parking lot on the home side of the stadium and it will connect to new press box that will be two-tier in 2020 and will have an elevator.