Since 1995, Mauriceville Municipal Utility District (M.U.D.) has been providing water to residents of the Mauriceville area 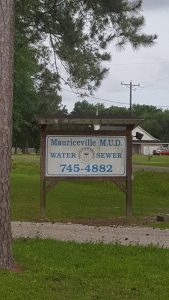 Since Harvey damaged its office, Mauriceville M.U.D. has been working out of a makeshift office and still providing professional customer service.

That will soon change with the district having its official groundbreaking on its new office on Tuesday evening.

Brad Haeggquist, general manager of Mauriceville MUD said, “The construction process should take about four months. It is being built by Jack Built out of Orange.”

What is better he said, is that the new building will not be paid for by customers.

“Most of it was paid for by our insurance, the other part, about 15-percent is being taken care of by FEMA,” Haeggquist said.

The new building will have a drive-thru that gives convenience to those paying bills, and updated facilities that are ADA compliant, including a handicap ramp and a handicap accessible public restroom.  The new building has the same square footage as the old building but is being utilized much more efficiently. The new building is also being raised to an elevation that did not flood during Harvey.

The hardest decision that evening to be made was the color to paint the building.

As one board member quipped, “You do not want five guys picking this.” 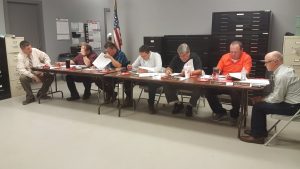 The board decided to get input from the Haeqqquist, the architect, and the ladies in the office.

Also in the meeting, the board adopted its drought plan and conservation plan as required by the Texas Commission on Environmental Quality (TCEQ).

Haeggquist pointed out that currently, M.U.D. pushes 750,000 gallons a day. The conservation or drought plan would take effect if demand reached 1.5 million gallons a day for 30 days, 2 million in any single day. Or if they lose two of its five wells.

“The state requires us to have a plan in place,” Haeggquist said.

It should be posted online at its website once finalized.