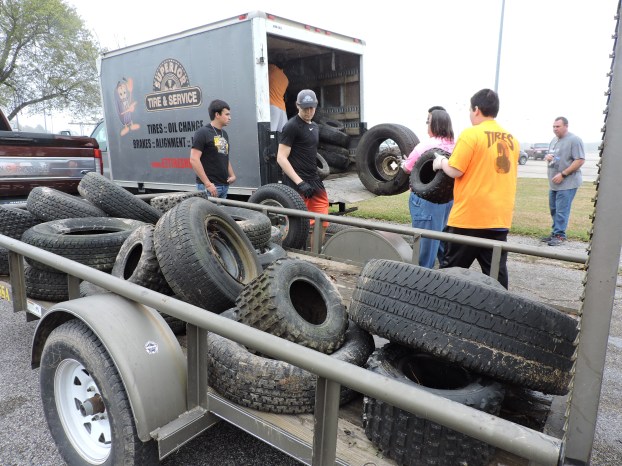 Katie Krantz, Education Director of Shangri La Gardens said, “Typically, a few passenger cars and truck tires, have been collected in past years, but this is the first year that tires have been expressly requested to be turned in.”

“Big Picture” Mike Hughes of Superior Tire commented that the tire assortment even included a few heavy-duty tires and at least one tractor-tire this year.

Drivers from Granger Chevrolet noticed that was they were picking up trash, debris, and tires collected by volunteers across Orange County neighborhoods, more and more tires seemed to be coming out.

“As folks started noticing that we were taking the tires, another one or two seemed to show up on the same corner the next round we made in that area.”

At the Boat Ramp, as trash bags were unloaded into the dumpsters, a crew from Superior Tire was on sight to unload and organize the tires as they arrived.  Joe Henry and his team were also on sight to collect any recyclable metal that was collected.

KOCB helped organize the event by securing the trash bags from Keep Texas Beautiful and coordinating with Southeast Texas Resources Conservation and Development to defray the cost of recycling the tires.  These tires have now been transported to a recycling plant in Texas and will be used to make various products including sports field and playground surfaces and even mixed into asphalt as road base.

KOCB is always seeking volunteers to join the “Trashy Ladies” for the Second Saturday “Talking Trash” projects with Orange Mayor, Larry Spears, and with promoting recycling and beautification in Orange County. KOCB is affiliated with Keep Texas Beautiful and Keep American Beautiful. KOCB has been active in Orange County since 1997.