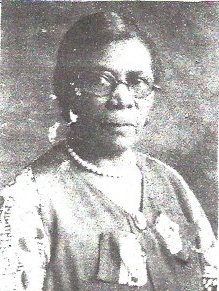 Emma Shirley Henderson Wallace was born in Waxahachie, Texas in 1876. She attended Prairie View College and became a teacher in 1896. She taught in Tyler, Ellis, and Jefferson Counties before moving to Orange in 1901.

She became one of the four teachers at the Orange Colored School which was then located in the Salem Methodist Church and the Mount Zion Missionary Baptist Church. In 1914 she joined the faculty of the Orange Public School System.

In the 1920s her husband Lofty Henderson died, and she married Anderson Wallace.

Under her leadership, the school established a library, started a band and choir, drama club, and built basketball and tennis courts. She also started a drill corps to support the Dragons football team that formed in 1946.

In 1946 at the request of the Moton Parent-Teacher Association the school was renamed Emma H. Wallace High School in her honor. At that time the school had 26 teachers and 820 Students.

On May 21, 1947, Prairie View College awarded Wallace a Certificate of Achievement in recognition of her 51 years of service in public schools. She was credited with much of the “progress made in education among her own people in public education.”

C.O. Chandler was serving as assistant superintendent of schools that year and remarked: “Mrs. Wallace did not tell me she was going to receive the award. I found out from another source. This is an example of her modesty about her accomplishments.”

She was also awarded an honorary degree from Prairie View College in 1947.

Wallace retired from the Orange Public School System in 1952. In addition to her roles in education and civic service, she had been an active member of Mount Zion Baptist Church and the Order of the Eastern Star.

She moved to Dallas in 1959 and died there in 1968. Her body was returned to Orange for burial in Hollywood Cemetery. A Texas Historical Marker has been placed at her gravesite.

At the Miriam Stark Declamation Contest held at Wallace High in 1945 H.J. Lutcher Stark paid tribute to her by saying “Things don’t just happen, but they develop because of wise and capable leadership of which Mrs. Wallace is the embodiment, an opinion formed not in a day but through years of observation of the activities and attitude of this worthy lady.”

The school named for her has stood vacant and derelict for decades, but today there is a dedicated group trying to preserve Emma H. Wallace High School in a way to show future generations the contributions African-Americans like Emma Wallace made to the history of Orange.

For information about the restoration project, the group has built a Facebook page, Wallace High School Dragons