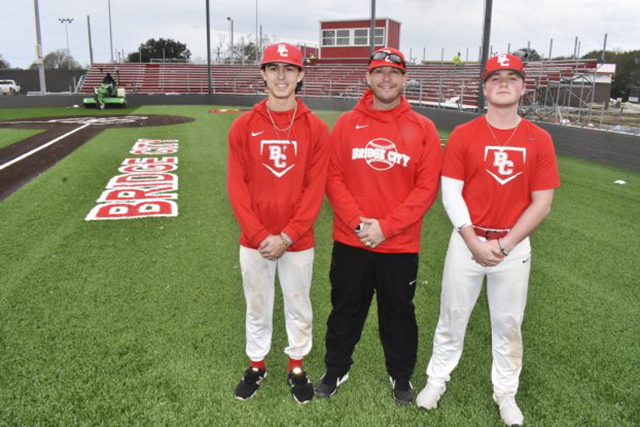 BRIDGE CITY — When Bridge City begins to play on its new baseball and softball fields, baseball coach Chad Landry expects the construction estimated at more than $2 million will pay itself off in a short amount of time.

“The way it looks, the way it’s going to be presented now — it’s a first-class design — they really got after it,” Landry said.

The Cardinals will get after it as well, real soon.

“It’s crazy,” second baseman Cace Skinner said. “Playing on the same field the last three years and then having this for my fourth year, it’s pretty wild, but I’m looking forward to it.”

While construction has been delayed by weather — Dec. 1 was the planned date of completion — Landry said the 1,000-seat stadium would be finished in time for the Alumni Game on Feb. 16. The 4A fifth-ranked Cardinals are scheduled to host their own tournament Feb. 21-23 to start the regular season.

“We’ve had the wettest three months in history, it seems like,” Landry said. “It’s a little bit delayed. If everything goes right the next four or five days, we should get on it by Wednesday.”

For now, the baseball Cardinals have voyaged to Lumberton, Nederland and Sabine Pass for practice.

Bridge City softball coach Kayla Gallardo said her field will be ready for the Feb. 19 home game against Nederland. The softball stadium, which is not named, will seat 750.

The softball Alumni Game will likely be moved to Feb. 17 or March 3, and the originally scheduled home game with Buna will be contested Feb. 11 at West Orange-Stark because Buna’s field is also undergoing renovations, Gallardo said.

The baseball field that was previously at the site Coach Chuck Young Field will stand, just to the west of the football stadium, had been in existence for 30-plus years, according to Landry.

“It was time,” he said. “It needed a facelift. With the administration and the school board naming the field after coach Chuck Young and have a brand new field with his name on it, it was time.”

The number 26 is posted on the right-field wall, in recognition of the number of district titles the Cards have won.

The complex will include batting cages for softball, concession stands and ticket booths. The baseball and softball fields will include turf for the infield and natural grass for the outfield, with the expectation to convert the outfield to turf “down the line,” Landry said.

“There’s a hard-number figure, and in order to get everything redone like it needed to be, this had to be sod for the initial rebuild,” Landry said. Dallas-based Sports Field Solutions provided the infield turf for both baseball and softball.

“What they did do was, in the outfield, it has the same drainage that’s underneath here [infield],” Landry said. “So, like last week, when it rained over an inch on Tuesday, that outfield was dry in like 20 minutes.”

Whereas on the old field …

“On the old field, we would have been swimming in left field,” he said. “Seriously.”

The players said they’ve done that before.

“It means a lot to me,” Green said. “Always been playing on dirt here and going to other turf fields, I just always wanted it as my home field, and finally getting it this year is amazing.”