Schultz gets extension through 2021 with Cards 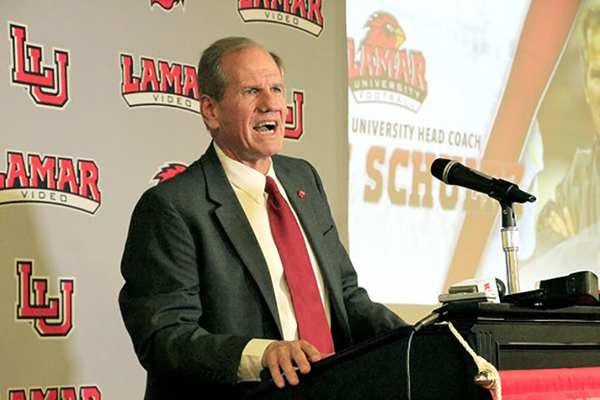 “I am very excited to announce this contract extension,” said Born. “This is a process that we started immediately following the conclusion of the season, and we’re happy it is completed. Mike has done a great job in a very short period of time building our program back to national respectability. We look forward to seeing where the program is headed under his direction.”

In just his second season at the helm, Schultz orchestrated one of the largest single-season turnarounds. Following up a 2-9 campaign in 2017, LU closed the year rattling off six-straight wins which led to the program’s first selection to the NCAA FCS Playoffs.

“First, I want to thank (University President) Dr. Kenneth Evans and (Director of Athletics) Marco Born for their hard work in getting this done,” said Schultz. “Both my wife and I are excited to be at Lamar University and part of the Golden Triangle. I look forward to building on the foundation of this past season and taking this program to the next level.”

In the midst of their historic run, the Cardinals knocked off three nationally ranked teams and a conference co-champion (UIW) who ended the regular season ranked. Unfortunately, the Cardinals’ historic run came to an end in heartbreaking fashion in the opening round of the playoffs when the Cardinals dropped a three-point decision at Northern Iowa.

The Cardinals will kick off the 2019 campaign Saturday Aug. 31 against Bethel. It will be one of six home games for the Red and White in the new year.