Fighting cancer one step at a timeBy Courtney Zetar 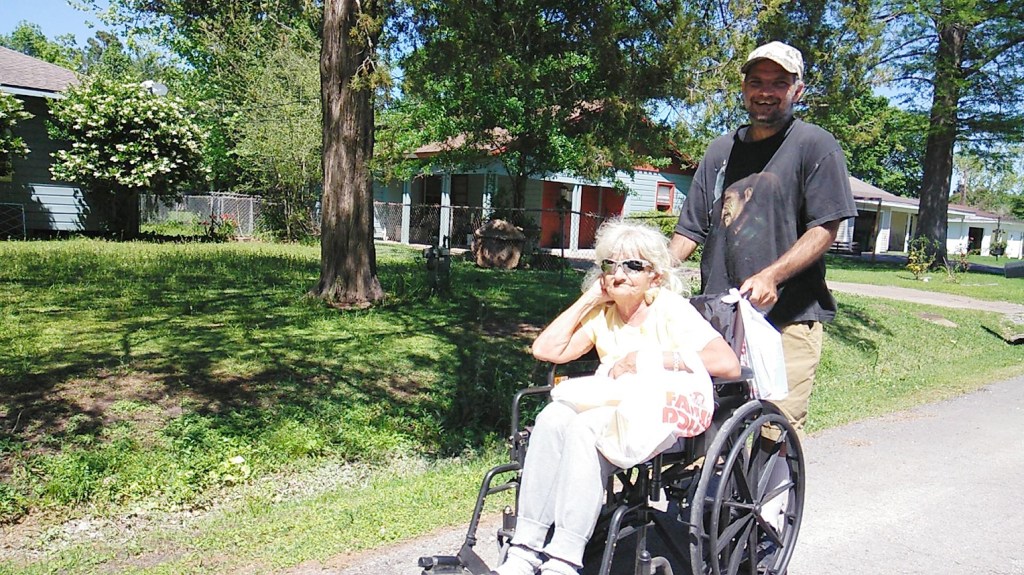 If you see Vita Moss being pushed in a wheelchair around town, don’t offer her or her son James Moss a ride because you will get turned down respectfully and there is a wonderful reason why.

Vita Dolores Moss, born 1943 and is a Staton Island native, has been battling cancer for the past year. Vita said she was first diagnosed after falling and breaking her hip, “I went in after the accident and they told me that I had another problem and one that wasn’t going to heal so easily.”

The doctors found a small spot on her breast. Not long after Vita and her family were met with a devastating diagnosis. “They told us it was cancer in her breast and it was spreading quickly,” said James Moss, Vita’s son.

James Moss, a former West Orange Stark alumni, has been by his mothers side through it all and has shown amazing courage during a time of extraordinary pain and suffering. His brothers David, Joshua, and Gordon, also are very involved in their mother’s day to day dealings.

But it is James, behind the wheelchair of his mother, walking her one step at a time around town.

“We go everywhere” James continued, “It started after the accident and is something that has kind of took a life of it’s own I guess.”

Vita recalls several moments of people asking her or James if they needed a ride. “People always stop and ask if I need a ride or if I’m ok and I just say I’m fine and no thanks to the ride.” James also reflects, “I can’t tell you how many times we get asked if we need a ride and she always says no.”

What is the reason for turning down so many opportunities for a ride? It would undoubtedly make things easier, especially on James’ legs.

There are times when James may walk half way across town and she still refuses a ride. So it begs to the question why? The answer was something Vita has no problem answering.

“Time, Vita continues, I don’t know how much time God has given me. My son and I walk everyday, all day, and where ever I need to go. During the this time I can enjoy what God has created for a longer period of time, which is different with a ride when things just go flashing by so fast.”

James also enjoys the walks with his mother saying, “I get to spend so much time with my mother while she is still here and take every step with her, I will always cherish these moments.”

In mid 2017, Vita was told her cancer was stage 4 and that she had a 2% chance of survival. Her family made plans for the worst but Vita had other plans. “No matter what the doctors told me I never have and never will give up, it’s just not in me, God did not build me that way.” said Vita.

After surgery and prayers she did the unthinkable, she survived stage 4 cancer. Miraculous to some but not to Vita and James. They walk strong in there faith every day, one step at a time. Fighting the odds of cancer, and truly living each day as if it is the only day God has given them.

Today Vita still battles returning cancer cells and is in need of prayer daily. She still visits her doctors and her family remains strong through the entire process. “No matter what she is my mother and I will always do what I can and that also goes for my brother’s we love our mother dearly.” said James.

Even though the journey has been difficult, Vita’s faith has not wavered saying, “The fight is not an easy one for me but no matter what happens I’m so thankful for today and everyday I’m allowed to be here. When my time is up I know one thing for sure, I’ve truly been blessed with such an amazing family, an amazing son, and an awesome God, who will one day take me in his arms and welcome me home, until that time comes, through the feet of my son, I will take it one step at a time and respectfully decline the ride.”