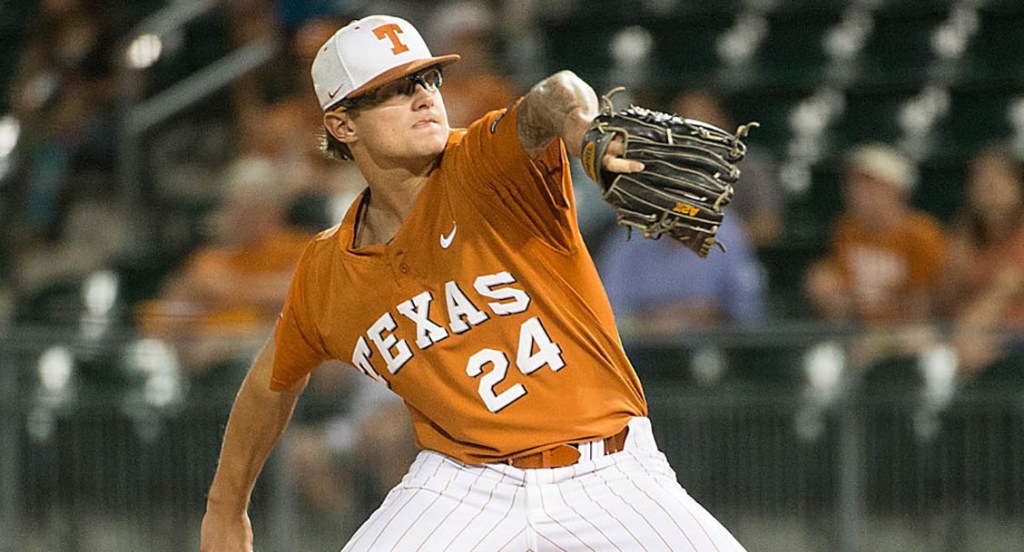 AUSTIN, Texas — The depth of the Texas pitching staff in terms of quality arms was in question heading into the NCAA Tournament. With Blair Henley delivering a third-straight gem of a performance from a Texas starting pitcher in a 3-2 regional-clinching win over Indiana on Sunday, it was the team’s three weekend starters who lifted the Longhorns to the program’s first super regional appearance since 2014.

An All-Big 12 selection for his performance during the regular season, Henley saved his finest performance of the season for a game that allows Texas (40-20) to wait for the outcome of the Oxford Regional hosted by Ole Miss on Monday to see who they will face next weekend. Henley’s 7.1-inning outing was his longest of the season as he tied a career-high with eight strikeouts in a 99-pitch performance where he scattered six hits, gave up no earned runs and was able to limit the damage when Indiana (40-19) threatened.

Henley got himself out of the biggest jam of the night by striking out the side in a wild third inning where the Hoosiers could have easily broken the game open. Two singles and a fielding error led to Indiana taking a 2-1 with two outs in the bottom of the frame when Henley was called for a balk.

Though the balk put runners in scoring position for Hoosiers, Henley eventually got Indiana third baseman Matt Gorski to go down on strikes after a six-pitch plate appearance to end the threat.

Henley followed a gutsy performance by Nolan Kingham in a Saturday night win over Texas A&M (7.2 innings, nine hits, three runs, two earned, eight strikeouts) where he was recovering from a bout with the flu. Kingham’s brilliant night came on the heels of Chase Shugart mowing down Texas Southern (six shutout innings, four hits, five strikeouts, no walks) in a 10-0 victory to open the tournament.

In a combined 21 innings of work in the Austin Regional, the Texas starters combined to give up only one extra-base hit (16 total hits allowed) while striking 21 batters and issuing only one walk in three games.

With Henley in a groove following the third-inning picking, the Texas bats got to work through their issues with Indiana left-handed starter Andrew Saalfrank. Using a breaking ball that the Longhorns struggled to pick up through the early innings, Saalfrank struck out eight Texas hitters and was cruising until the sixth inning.

That’s when with one swing of the bat, All-Big 12 designated hitter Zach Zubia crushed a 3-1 pitch to center field for a solo home run that sailed to the left side of the batter’s eye.

With two outs and David Hamilton on first in the top of the seventh, Kody Clemens ripped a double into the right-field corner. The ball was hit well enough to allow Hamilton to come across with the go-ahead run — it was the seventh RBI and third extra-base hit of the regional for Clemens, who was named the tournament’s Most Outstanding Player.

Indiana threatened twice late in the game, but the Longhorns dodged bullets in the eighth and ninth innings to advance.

The eighth inning saw the Hoosiers rip what appeared to be a go-ahead hit against Parker Joe Robinson. However, left fielder Matt Gorski’s double that got by Masen Hibbeler in left field skipped into the visiting bullpen for a ground-rule double, which held third baseman Luke Miller at third. Ryan Reynolds ended the two-out threat with runners in scoring position by bare-handing a slow roller to the third-base side of the infield and nailing Logan Sowers at first base for the third out of the inning.

Indiana went to work against Texas closer Andy McGuire in the ninth, quickly getting two men on with no outs after McGuire gave up a single to catcher Ryan Fineman and hit designated hitter Scotty Bradley. McGuire battled back and struck out second baseman Justin Walker before walking shortstop Jeremy Houston to load the bases with one out.

David Pierce then decided to go with Shugart, who struck out the only two batters he faced to seal the victory. On a weekend when starting pitching for the Longhorns dominated, it was fitting that starter finished the job.