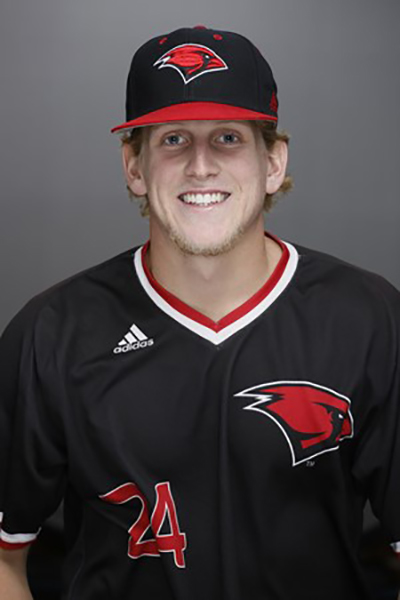 “All three of these players deserve to be honored not only for their successful seasons, but also for their character in the community and their academic success,” said UIW head coach Patrick Hallmark. “We are thrilled for them and will look to challenge them next season to evolve their skills and continue their development.”

Rogers ranked third on the team with 19 multi-hit games, including 12 two-hit games, three three-hit games, three four-hit games, and a five-hit game. He set a program record with a 5-for-5 outing and recorded two runs and an RBI against Northern Illinois on March 4. He had a 19-game, reached-base streak and registered a hit in 14 consecutive games.

“Ridge had a terrific freshmen year setting the table for our offense,” said Hallmark. “His defense was solid as well, which we need more of. He deserves this award and we are excited about his future.”

Bergeron played and started in 55 games for the Cardinals, primarily at second base. He finished the regular season ranked second in the league and No. 87 in the nation with 50 RBI. Bergeron also tallied 75 hits, good for fifth in the conference. He averaged 1.36 hits per game, which ranked sixth in the SLC. The Bridge City, Texas, native was also seventh in the league with 46 runs.

“Kyle was a standout run producer all year,” said Hallmark. “It’s great that others have noticed as well. We are proud of him and we are looking for big things from him next season.”

Gonzalez played and started in 55 games in the outfield for UIW. He led the conference and ranked No. 23 in the nation with 82 hits during the regular season. He also averaged 1.49 hits per game, which led the conference and ranked 40th in the nation. Gonzalez led the SLC and ranked No. 21 nationally in the “toughest to strike out” category (13.8). The Laredo, Texas, native finished the season second in the league and No. 51 in the nation in batting average (.371). He was also eighth in the Southland with a .446 on-base percentage.

Gonzalez had 21 multi-hit games and finished the year on a season-high 15-game hitting streak. He had five multi-RBI games, reached base in 15 consecutive games, and posted a 25-game reached base streak during the season. Gonzalez tied a program record with a perfect 5-for-5 outing twice. Overall, he had three games with five hits.

“Eddy’s batting average is incredible and deserves honoring,” said Hallmark. “He’s played a big role in many of our wins this season. We look for continued success from Eddy.”