Cardinals escape with Game One win over Hawks 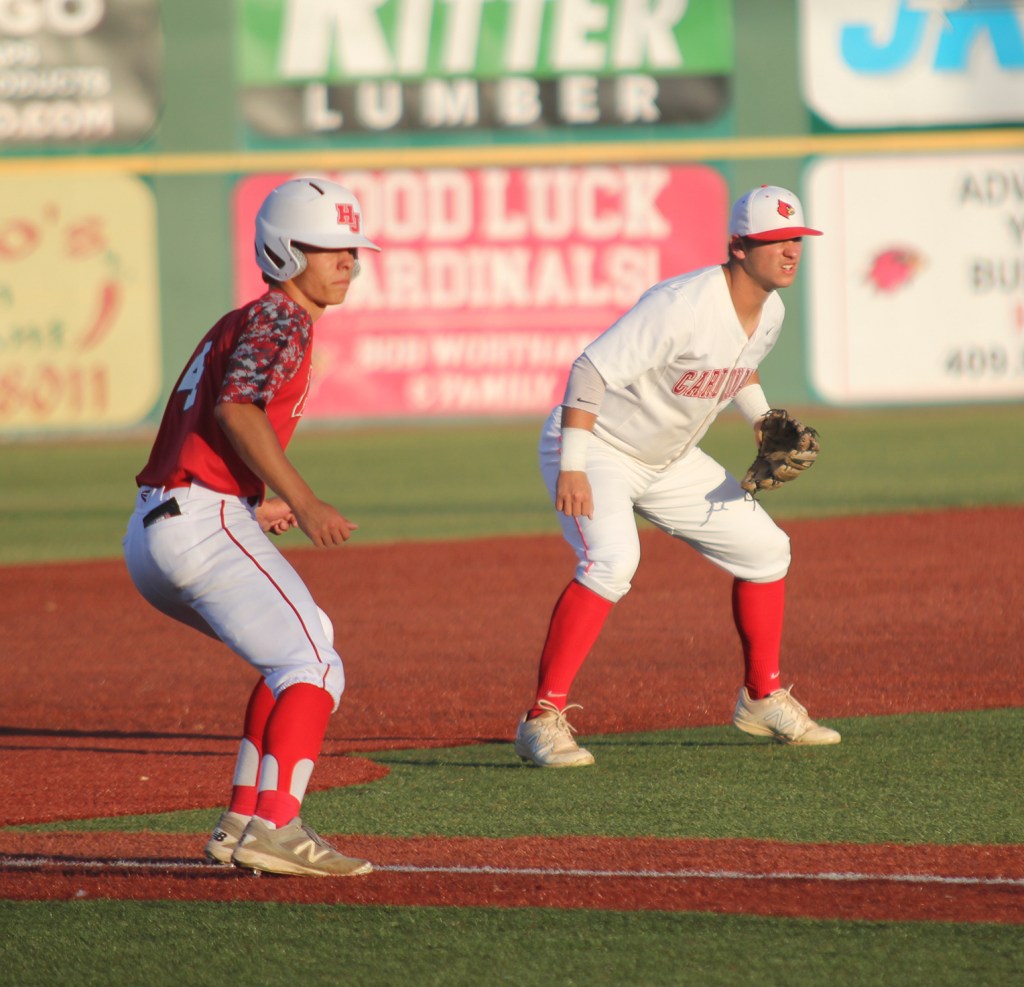 BEAUMONT – Escaping with a 3-2 Game One victory Thursday night, the Bridge City Cardinals will look to finish off the Hardin-Jefferson Hawks Friday at Lamar University’s Vincent-Beck Stadium.

The District 22-4A champion Cardinals (24-7-1), got all they could handle from the Hawks (16-8), 23-3A runnerups, but Bridge City was able to squeeze it out with a run in the bottom of the sixth on a controversial double steal.

Game Two will be Friday night at 7 p.m.. back at Lamar. Game Three, if necessary, will be at 2 p.m. Saturday at Lamar.

With the game knotted at 2-2 in the bottom of the sixth, Cardinal Cace Skinner came up with a sharp single to center off H-J starter Grayson Cash and Peyton Havard followed with a single to shallow center.

With Cameron Yadon at the plate, both runners eventually took off. A tag was made on Havard between first and second but the officials felt that Skinner had crossed home plate before the tag of Havard as the Cardinals were able to snag the lead.

Justyn Romero earned the win on the mound for the Cardinals in relief. He tossed the last 1 1/3 innings, allowing no hits while fanning two.

The Hawks blew several golden opportunities throughout the night as they left 10 runners stranded . H-J finished with eight hits while the Cardinals had seven.

Cash went six innings for the Hawks, scattering the seven hits while fanning one and walking one.

Havard worked the first 5 2/3 innings for the Cardinals as he managed to get out of a few jams. He allowed seven hits while striking out eight and walking two. Jacob Goodman pitched to one Hawk and allowed a hit.

The Hawks had the bases loaded with no outs in the top of the first inning but Havard worked out of it by striking out the side.

The Cardinals responded by collecting a run in the bottom of the first.

Schuyler Thibodaux, who was 2-for-3, stroked a one-out deep double to leftfield and courtesy runner Luc Hollier scored when Romero ripped a double over third base all the way to the fence.

The Hawks tied it up in the top of the second.

Justin Smith had a one-out single to center and went to second on a nice sacrifice bunt by Mason Murray.

Brayden Pomirko, who went 3-for-4, reached on an infield single and an errant throw to first allowed Smith to score.

The Cardinals jumped back up 4-1 with a tally in the bottom of the fourth.

Caleb DuBois had a leadoff single to shallow right and Romero was hit by a pitch. Hollier came through with a clutch RBI single to left to plate DuBois.

The Hawks got even in the top of the sixth.

Logan Paschal, who was 2-for-3, had a leadoff single past first and moved to second on a sacrifice bunt by Smith. After Murray flied out, Havard reached the pitch limit. Goodman came in Pomirko sent the first pitch to left for a RBI single.