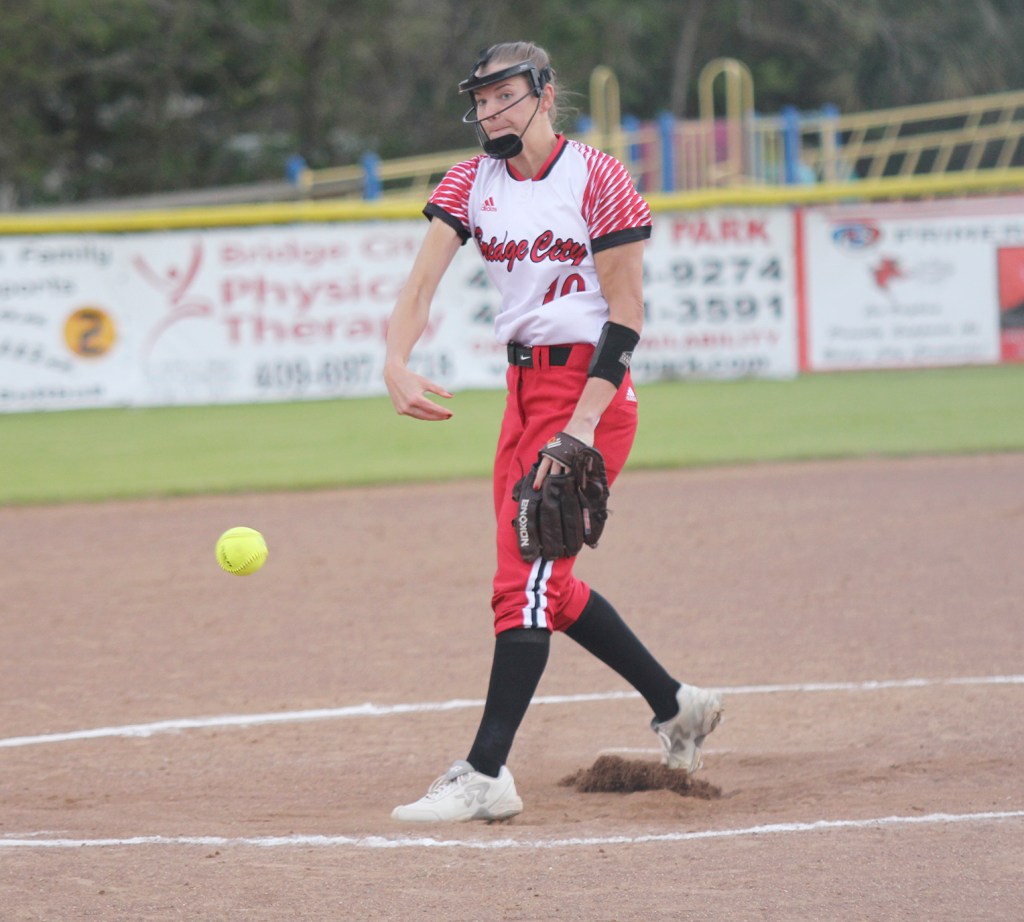 BRIDGE CITY -The Bridge City Cardinals edged out the Orangefield Bobcats in a 4-2 pitcher’s duel Thursday night in Bridge City, in the District 22-4A opening game of the district season.

Kassidy Wilbur was the story for the Lady Cardinals (15-7, 1-0), doing it in the pitching circle and the batter’s box. Wilbur through all seven innings with 14 strikeouts, allowing five hits and two runs on the outing. She also went 1-for-3 from the plate, and the one hit being a long two run-home run with two runs batted in, with the home run eventually being the deciding runs.

Lady Bobcat pitcher Kaylee Ancelot went all seven innings with two strikeouts, and was able to keep the Lady Cardinals from scoring, for a while at least, with groundball pitching.

For the Lady Bobcats (16-5, 0-1), Autumn Frost, was the leading hitter for the team, going 2-for-3 with a home run and single, and the home run in the fifth inning was the first run for the Bobcats.

The Lady Bobcats had a chance early, but couldn’t capitalize, and that would come back to haunt them later, leaving runners on second and third, in the third inning. Even the fifth inning with the Frost home run. After that Wilbur sat down the side on three consecutive strikeouts. Wilbur was able to keep the batters off balance with a nice diet of fastballs and offspeed pitches, and faced more than three batters in only three of the seven innings.

The game really kicked off in the fifth inning, when Frost hit a long homerun to left for the Bobcats, going up 1-0. The Cardinals quickly respond in the bottom of the fifth with four runs of their own. Chloe Halliburton would reach base on an error, and be hit around to scoring position by Natilee Reed. Jalynne Burch would hit an infield single to drive in Halliburton and Reed, to take the lead, 2-1, from the Bobcats.

In the same inning Kassidy Wilbur would hit an opposite field homerun to drive in Burch and herself to take a 4-1 lead after five.

In the seventh inning the Bobcats would try to make a comeback, scoring one run on a Kaylee Ancelot home run, but would fall short. The Bobcats would get two singles, but Wilbur shut down the comeback with two strikeouts to end the game.

Both of these teams are projected to have solid seasons and make a post season run, and both have a little ways to go before then.

The Lady Cardinals will visit Silsbee Tuesday while Orangefield takes on Hamshire-Fannett.