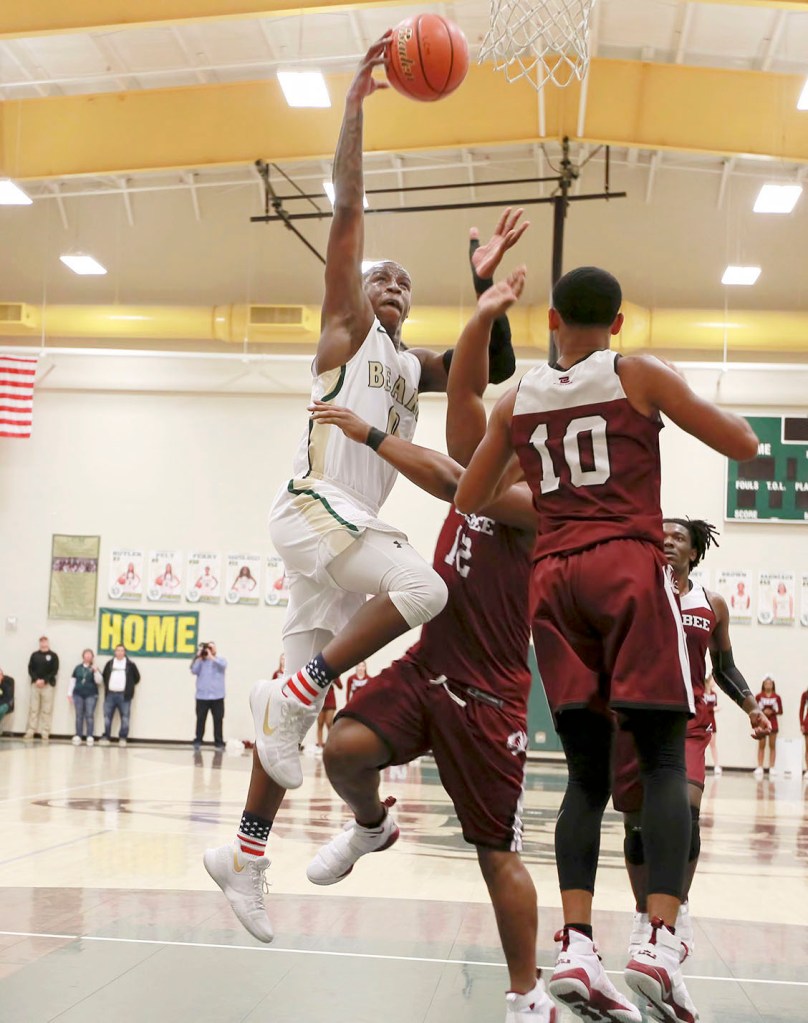 Leader Photo by Mark Pachuca LC-M's Katon Brown flies to the basket against Silsbee. Brown is the MVP of the 2018 All-Orange Leader Basketball Team.

It was another solid campaign for Orange County hoops in the District 22-4A season.

Even though defending Class 4A state champion Silsbee dominated the district again, three local teams found their way into the postseason.

Coach Brad Jeffcoat’s Bears got past a gritty Diboll team 43-42 in bidistrict playoff action before falling to Hardin-Jefferson 50-42 in the area round.

The West Orange-Stark Mustangs punched their playoff ticket again under the direction of Tremaine Hancock. The Mustangs netted a thrilling 74-71 bidistrict playoff victory over Jasper before falling to state power Houston Yates in the area round.

LC-M and WO-S had two classic 22-4A battles in 22-4A play with packed gyms at The Grove at LC-M and at Mustang Gym, where the Bears pulled out two nailbiting wins.

The Orangefield Bobcats made the playoffs for first-year head coach Jake McDonald.

The Bobcats were once at 1-7 in 22-4A play before capturing their last two games to force a fourth-place play-in game with rival Bridge City.

When the Bobcats and Cardinals hooked up, it went down to the wire.

Bridge City’s Chason Burch hit the shot of the season when his three-pointer at the buzzer in overtime gave the Cardinals a home win over the Bobcats. Orangefield returned the favor with a five-point win at home and then defeated the Cardinals 37-36 at LC-M to nab the fourth-place playoff berth.

It was definitely an exciting district to cover. Next year should certainly be a challenge for all of our teams since they were definitely senior-oriented this past season but there is plenty of young talent that will get their chance.

It was pretty east picking the Most Valuable Player this season in LC-M’s senior Katon Brown.

Brown has played such a key role in the Bears’ success in his run in green and gold and he capped it off by going out in style.

Brown filled up the stat sheet for the Bears, averaging 19.2 points a game to go along with 11 rebounds, 4.5 assists and four steals.