Early voting for Primaries begin, filing for other entities ends 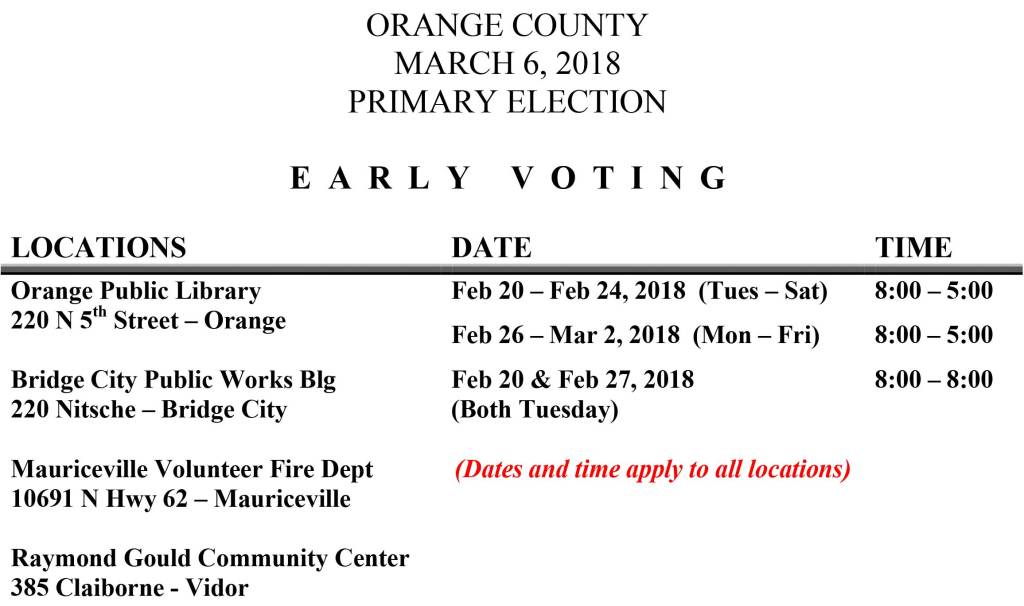 Time to start casting your vote for the Primaries.

Early voting begins on Tuesday, Feb. 20 to determine which candidates will be on the November General Election Ballot.

While Kenneth Luce (R) name will be on the ballot, Luce dropped from the race after the ballots were printed. Also on the Democrat ballot is Don Brown, whom the Democrat Party determined to not have filed in a timely manner so ineligible to be on the November General Election Ballot. Both were running for Orange County Judge.

With three names on the Republican ballot for County Judge, Brint Carlton or Dean Crooks will have to receive 51 percent of the vote in order to avoid a Run Off election before the General election.

Filing ended for local entities for the May 5, 2018 General Election.

Commissioner of the General Land Office

Member, State Board of Education, District 7

Justice of the Peace Pct. 2

Justice of the Peace Pct. 3

Larry Spears Jr. and Charles Ray Thomas will face off for Mayor.

Pat Pullen is the only one to file for Single-Member District 1.

A special election to take place at the same time for At-Large Position 6 will not have an opponent at Paul Burch is the only one to file for the position. Currently Spears holds the seat but is stepping down to run for Mayor.

The City of Pinehurst will NOT be holding an election this year.  All incumbents filed for their current seats on the Council and none are opposed.  The following individuals will retain their places on the Pinehurst City Council:

West Orange will not see an election as no one challenged incumbents Shirley Bonnin, Dale Dardeau and Mike Shugart.