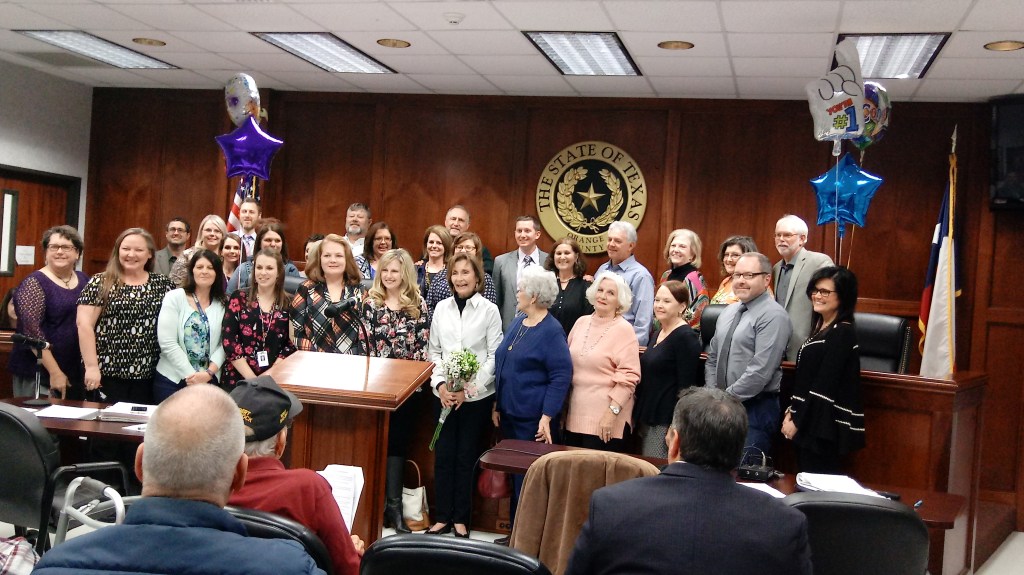 Commissioners’ Court was a special one, Tuesday afternoon, as the focus was on recognition of very special guests – area teachers.

As a move to recognize the great value of local educators, the court signed a proclamation for February 2018 would be “Teacher Appreciation Month”.

The courtroom was crowded with local teachers and supporters as each commissioner took turns expressing gratitude for all the many blessings teachers bestow not only on their students, past and present, but on the families and communities of those students.

Commissioners pointed out that this impact was not only throughout a teacher’s career, but also during this very trying post-Harvey time, when many of them have had to make due with already dwindling resources and now packed classroom and displaced students, as some schools still continue to struggle to recover from the storm and get things back to normal.

“Teachers do make an impact,” Commissioner Barry Burton said. “I live with that daily. My wife’s a teacher. We go to a football game and it’s like I’m with a rock star. All of the kids – not just the fourth graders she teaches – but kids she’s taught all the way through – they run up to her and hug her, and you can see the impact you make on these people at an early age, that stays with them for a lifetime. And that’s a calling that you need to be proud of.”

Similar sentiments were expressed as each commissioner mentioned their own educators that made an impact on them as children, as well as members of their families that were now or had been employed in the educational system.

Judge Stephen Carlton then read the proclamation before presenting his own special recognition to his past teachers – kindergarten, 1st, 2nd, 3rd and choir teachers.

Lanie Brown of Congressman Brian Babin’s office then read a letter addressed Orange County Educators from Congressman Babin, which began “One of the greatest responsibilities a person can have in this society is to teach. It is a gift given by God to special individuals.”

The letter went on to acknowledging all they do for our youth, much of which they do in their own time and with their own funds. All the teachers in attendance were then called to the front of the courtroom to be recognized and treated to a special reception in their honor after the meeting.

Jessica Hill with our Economic Development Corporation introduced Director of Public Affairs for Jefferson Energy Company Mark Viator, who owns the terminal that sits on the east bank of the Neches River Ship Channel at the Port of Beaumont.

The terminal was founded in 2012 to meet the needs of the Gulf Coast refining market and has since expanded to include transport services for petroleum and ethanol products to be exported to Mexico, India and China.

Jessica Hill added that future growth is also planned in the area, not only by Jefferson Energy, but several other companies that have economic development projects underway.

Emergency Management also updated on the post Harvey status, noting that help to the Orange and surrounding areas has been vast and continues to pour in from FEMA and various other organizations including the United Way, in the form of not only monetary donations but furniture, drywall and other rebuilding materials donated by everyone from Catholic Charities to the Salvation Army and many others.

FEMA is still in the process of contacting people for their programs including the PREPS program (Partial Repair and Essential Power for Sheltering) and the DAHLR program (Direct Assistance for Limited Home Repair). To date, 6,111 households are eligible for the PREPS program, with 1,972 of those contacts unsuccessful, due to either relocation or phone number changes.

In the coming weeks, members of FEMA who have not been able to reach citizens by phone, will start canvassing door to door. Both programs are designed to supplement housing needs by performing emergency work and power restoration in disaster damaged residences, providing temporary repairs to allow homeowners to remain in their homes as permanent repairs are completed. Residents are encouraged to continue to visit the Facebook page Orange County, Texas Harvey Recovery Information page for more information on these and other programs.

On February 1, there will be a Rebuild Southeast TX Disaster Recovery Meeting for all of Orange, Hardin and Jefferson County residents or organizations wishing to learn more about the recovery process thus far and how they may participate in rebuilding the area. A group has been formed called the Tri-County Disaster Rebuild SETX and those who wish can join. The meeting will be from 6 to 8 p.m. at the Lumberton High School.