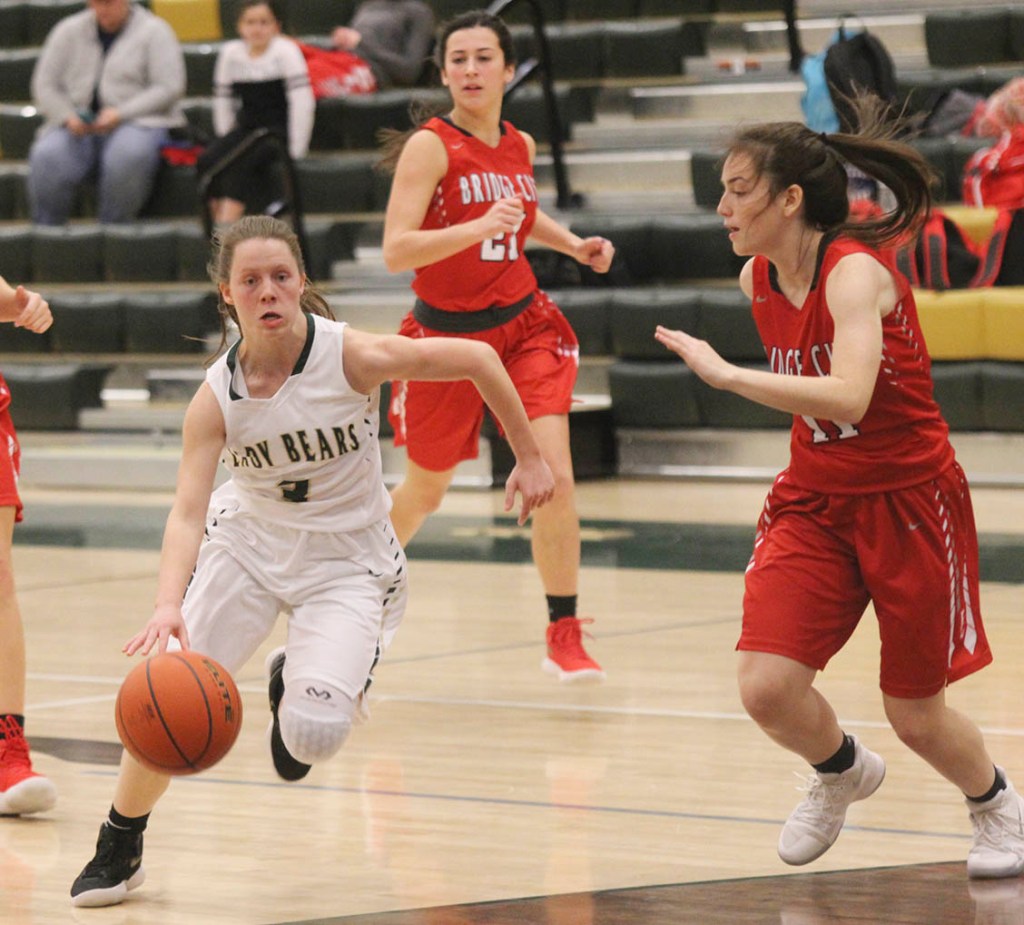 LITTLE CYPRESS — After suffering a tough overtime setback to Little Cypress-Mauriceville in the first half of District 22-4A play, the Bridge City Lady Cardinals traveled to The Grove Tuesday night and returned the favor, defeating the Lady Bears 47-44.

The Lady Cardinals crushed the Lady Bears on the boards, outrebounding LC-M 47-32 and received a pair of double-doubles from Kassidy Wilbur and Madison Fischer.

Guard Chelsea Perry led the Lady Bears with a game-high 19 points, including hitting three three-pointers, and led the squad with nine rebounds. Jacie Miller had 16 points and three three-pointers and tried to rally LC-M back with eight points in the last period.

The Lady Cardinals improved to 3-5 in 22-4A play and are in fourth-place while the Lady Bears dropped to 5-3 and remain in third-place.

Bridge City has two games left to go against WO-S and Hamshire-Fannett and o0ne more win would put them in the postseason.

LC-M has games remaining against first-place Silsbee and second-place Orangefield. The Lady Bears have already clinched a playoff berth.

The Lady Cardinals were up by as much as 38-25 with 0:40 remaining in the third quarter and then had to hold off a late LC-M charge.

LC-M got as close as three points twice in the last eight minutes. Once at 40-37 after a big Miller three-pointer and then a Perry shot to end the game.

The Lady Cardinals were able to escape after some poor free-throw shooting down the stretch. Bridge City was 1-for-12 from the charity stripe in the fourth quarter and just 10-of-28 for the game. LC-M wasn’t much better, finishing 12-of-25.

The Lady Bears erased a 7-3 deficit in the first quarter to go up 10-7 heading to the second one as Perry had a five-point spurt.

The Lady Cardinals went on a 14-8 run in the third as Wilbur and Rylee Oceguera had four points apiece to aid the 38-25 Bridge City lead. A three-pointer by Perry trimmed it to 38-28 at the end of the period.

LC-M outscored the Lady Cardinals 16-9 in the final eight minutes as they tried to scrap back, but Bridge City was simply too much on the boards. The Lady Bears were just 4-for-9 from the free-throw line in the fourth.

Bridge City finished with 14 turnovers while LC-M had 13.

Zaria Johnson had six rebounds for the Lady Bears while Brielle Butler hauled down five.