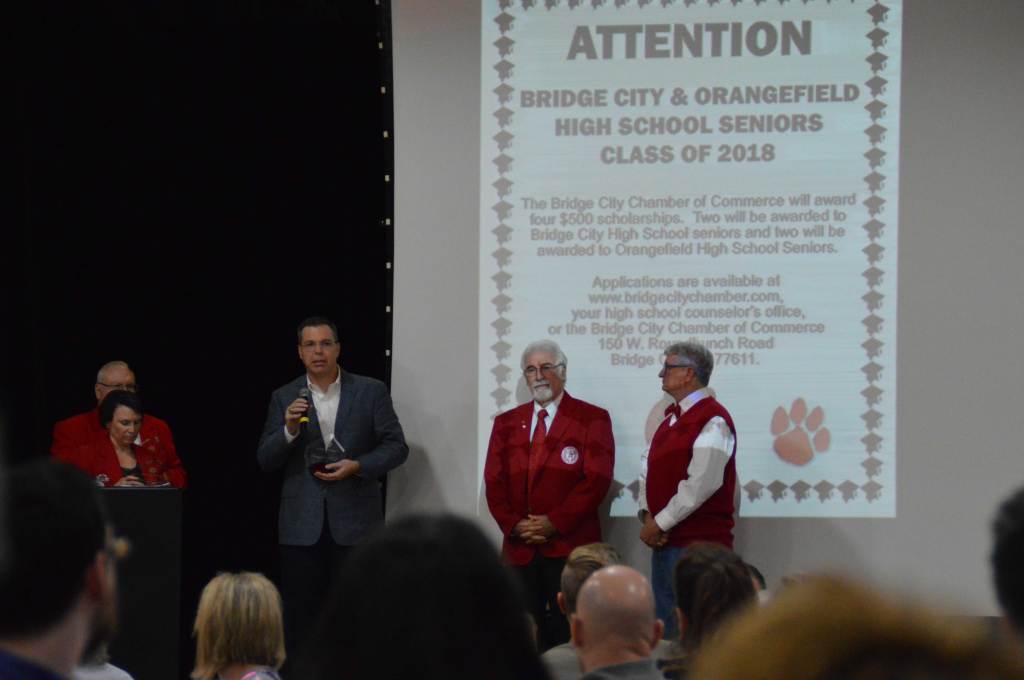 Bridge City Chamber of Commerce held its 58th Annual Banquet on Monday at the Bridge City Elementary School. The Chamber strives to make this event fun and lively every year. Good old Cajun music provided by the Gulf Coast Playboys band set the tempo for the “Taste of the Bayou” as attendees sampled food from several local restaurants.

Don Bonnin provided a Sports Memorabilia Auction with a wide variety of items for guests to bid on.

Neches Federal Credit Union provided their photo booth for everyone to take selfies, which were then emailed or texted to them.

Carissa Slaughter wowed the crowd with her amazing vocals while singing the National Anthem. Master of Ceremonies was Terry Stuebing.

There are members in all 50 states of this non-profit organization. Each member makes a pledge to live out the Great Commission and always be willing to help others.

The group’s mission statement is: “When God’s people are in need, be ready to help them. Always be eager to practice hospitality.” (Romans 12:13)

Jeepers4Jesus practices this in different ways. The majority of funds raised are used to pay biblical widows (I Timothy 5) utility bills. Each year, forty to fifty Jeepers travel to Bridge City from all over Southeast Texas and Southwest Louisiana to be a part of the Bridge City Christmas Light Parade so they can donate toys to the Bridge City/Orangefield Ministerial Alliance who distribute those toys to needy children in the area.

Jeepers4Jesus also holds a yearly ball drive “Balls Balls and More Balls for Kids” which are also donated to the Ministerial Alliance.   In March 2016, Deweyville, Texas flooded prompting Jeepers4Jesus to branch out from helping widows and needy children and help those affected by the flood. Just a few months later Jeepers4Jesus answered the call again to aid those affected in the flooding of Southern Louisiana, just one year later, Texas received catastrophic flooding due to hurricane Harvey prompting the Jeepers to take action again. 30,000 gallons of chemicals used to treat flooded homes, were distributed to flood victims from Rockport, Texas to the Louisiana border at no charge to those who received them. All these things are done to show the love of Christ to all.

The mission of Bridge City ISD, a progressive family/community-supported educational system, is to provide a comprehensive well-balanced instructional program in a safe learning environment to ensure the development of caring, responsible, productive graduates capable of contributing in a global society. Bridge City ISD has a long-standing tradition of excellence for generations dating back to 1941. Much has changed in our community, state, national and world since those days. Communities and school districts must evolve through the schools, churches, city government, businesses, industry, and community organizations to remain a vibrant, productive community our citizens are proud to call home.

Bridge City ISD has evolved through the years from a single school house educating dozens of students to the current student enrollment with over 2,900 students on four campuses.

On the 5th day of June 1970, the Orange County Commissioner’s Court was petitioned to call for another election for incorporation. A two to one vote of the people incorporated Bridge City, and shortly thereafter the first mayor and council were elected.

City services include animal control, code enforcement, police department, municipal court, water and sanitation utility services. Despite being devastated repeatedly by hurricanes, continues to be a thriving city and vitally important to Orange County. Bridge City has an abundance of natural resources (land, water, job opportunities in commercial and industrial fields) but the most important of which lies within the minds of its people. The efforts of all our leaders, past and present, has not been selfish or self-serving but directed toward the common goal of making Bridge City a better place to live. The future of Bridge City seemed bright under early leadership and continues to shine even brighter today as we continue “BUILDING BRIDGES TOGETHER”.

There is an opportunity for each and every child to find a place to excel and grow. Orangefield ISD provides a rigorous, aligned curriculum that focuses on preparing the student for success as a productive 21st century citizen. The mission of the district is to build and equip students to become 21st century leaders. This is accomplished daily with small class sizes, dedicated instructors, and sound educational practices.   Despite hurricane Harvey causing widespread damage to several structures on the Orangefield ISD campus as well as the entire Orangefield community, Orangefield ISD continues to provide quality education continuing to practice the district motto “Connecting Community, Unity, and Academics”.

Brandy Slaughter, of Energy Country Ford, received the honor of becoming a Lifetime Ambassador. She also holds the Vice Presidents position on the Board of Directors and is a past president. Brandy was unable to attend due to illness, so her daughter Carissa accepted the award on her behalf.

The Ambassador of the Year award went to Scot C. Shaffer, owner of Farmers Insurance. Shaffer is also on the Chamber’s Board of Directors and past president.

Gauthier expressed her gratitude upon accepting the gavel and encouraged any local business owners, who are not Bridge City Chamber members, to contact the Chamber to find out the many benefits of membership.