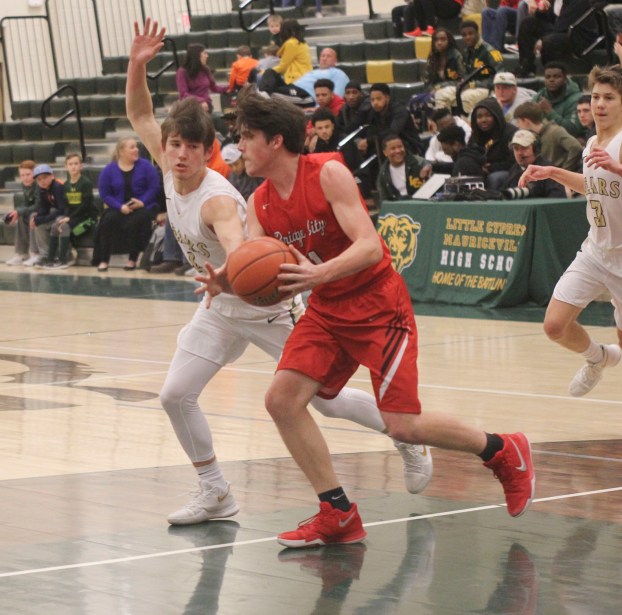 LITTLE CYPRESS — Getting off on the right foot to start District 22-4A play, the Little Cypress-Mauriceville Bears fended off the Bridge City Cardinals 65-58 Friday night at The Grove in the district opener for both squads.

LC-M would build several double-digit leads throughout the contest, only to see the Cardinals rally back to get within six or seven points late in the contest.

Katon Brown led the Bears with a game-high 18 points and a team-high seven rebounds.

The Bears received nine points from guard Cole Frost. LC-M guard Ty’Reke Brown had a superb game, especially on the defensive end and finished with eight points and five boards. Christian Weatherly had six rebounds for the Bears.

Bridge City point guard Chason Burch penetrated through the lane nicely throughout the night and paced the Cardinal arsenal with 15 points and was 9-for-12 from the free-throw line.

The Bears led 19-16 at the end of the first period as they buried four three-pointers in the quarter with Brown connecting on two and Bridges and Frost each had one.

Brown had eight points in the period and Frost hit a three-pointer at the buzzer to give the Bears a three-point edge.

The Cardinals went up 21-20 after a bucket by Max Baker early in the second period but the Bears closed out the quarter with a 14-7 run to go up 34-28 at intermission as LC-M had six different players score in the period.

The Bears were able to go up 51-40 after three quarters as they outscored the Cardinals 17-12 in the third. Brown and Bridges fired in five points apiece.

LC-M led by as much as 55-41 early in the fourth quarter but the Cardinals fought back behind Burch’s effort. Burch scored eight points in the final stanza and got the Cardinals as close as 57-51 after a pair of free throws with 3:40 remaining.

However, the Bears took advantage of a couple quick steals by Brown and Bridges that led to quick layups as the Bears went back up by 0 at 61-51.

The Cardinals finished with a 29-26 rebounding edge.

LC-M protected the ball well as the Bears only had nine turnovers while the Cardinals had 15.

Both teams will face Orange County games again Tuesday in 22-4A play as the Bears will visit Orangefield and the Cardinals will welcome in West Orange-Stark.