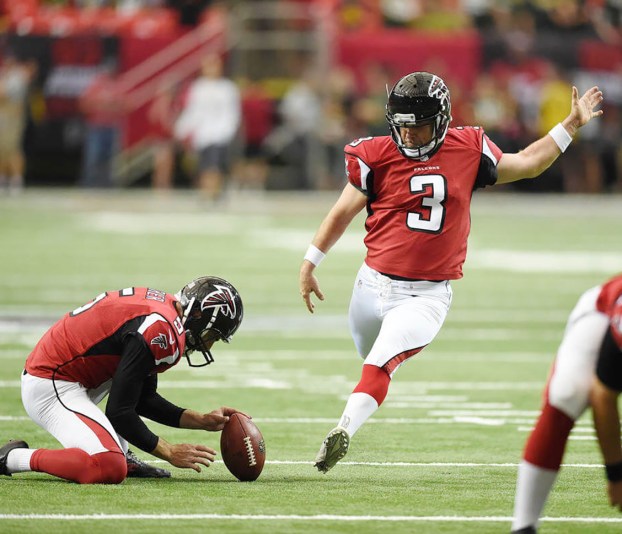 Bryant, an ageless wonder, has been everything a contending team could want in a kicker.

The 42-year old booted five field goals in Week 17 against the Carolina Panthers to help the Falcons, who made the Super Bowl last season, make the playoffs. That earned him the NFC Special Teams Player of the Week.

He was far from finished though as Bryant was a perfect 4-for-4 in the Falcons’ 26-13 NFC Wildcard Playoff win over the Los Angeles Rams last weekend.

Three of his nine field goals in the past two games have come from 50 yards or more, and Bryant became just the fourth kicker in NFL history to make two 50-plus yard field goals in a single playoff game.

It was Bryant who gave the Falcons an early lead last Saturday night against the Rams and a loud crowd at the LA Coliseum.

After recovering a muffed punt by the Rams, the Falcons took an early 3-0 lead with a 29-yard boot from Bryant.

Atlanta turned to Bryant on its next series, and he responded by nailing a 51-yard kick to extend the lead to 6-0.

Bryant’s biggest kick came late in the third quarter. After hitting a 25-yarder earlier in the third to give the Falcons a 16-0 lead and a bit of momentum, Bryant was again called upon to attempt a kick from 54 yards out.

A similar situation occurred in the Falcons’ Week 17 win against the Panthers, in which a miss would have set Carolina up with good field position in a one-score game. As he did in Week 17, the veteran came through with another huge field goal.

In a game where execution in critical situations is often the difference between a win and a loss, the Falcons may have one of the best X-factors in the leaugue in “Matty Ice.”

After the Rams’ game, Falcons special teams coach Keith Armstrong had this to say:

“It’s a great advantage to have him. He’s been in the moment several times, and he loves that. He loves that challenge. And that gives us enough confidence that you’re like, ‘Ok, he’s got it.’ “It’s really cool to have a guy like that who looks forward to the pressure.

Bryant has made 38-of-43 on his field goal attempts this season and is a perfect 37-of-37 on extra points.

Bryant and the Falcons will head to Philadelphia Saturday to take on the Eagles in the NFC Division Round. The game will air at 3:35 p.m. on NBC.

Good Luck “Matty Ice.” Hoping you get your “kicks” once again in a Atlanta victory.

BEAUMONT, Texas – Lamar University got a field goal from junior Nick Garth with 11:52 remaining in the second half... read more