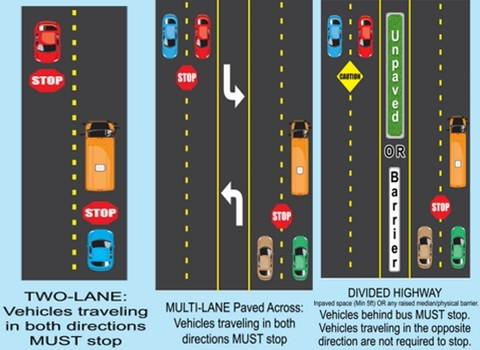 Do you know when to stop for a school bus? Those yellow buses have hit the streets again this week in Orange County transporting children to and from school — now may be the time to refresh up on what the law says.

The National Association of State Directors of Pupil Transportation Services has the following laws listed for Texas on their website: The major complaint that most drivers don’t understand is when do they have to stop when a school bus is flashing if they are on the opposite side of the road or a four lane road?

If you approach a school bus from either direction and the bus is displaying alternately flashing red lights, you must stop

Do not pass the school bus until: the school bus has resumed motion, or you are signaled by the driver to proceed, or the red lights are no longer flashing

Drivers who violate the law could face fines as much as $1,250.

Texas law also prohibits use of cell phones or other hand-held devices in school zones. Fines range from $200 to $500.

This was the fifth edition of the survey, launched by the National Association of State Directors of Pupil Transportation Services (NASDPTS) in 2011.

The one-day tally of stop-arm violations this year was 78,518. NASDPTS officials noted that this figure can be extrapolated to more than 14 million illegal passes of the buses surveyed in a 180-day school year.

NASDPTS website points out that the most alarming finding of the survey is that 1,483 (about 2%) of the total illegal passes were on the right side of the bus, where students load and unload. Still, the majority of the violations, 75,986 (about 98%), were on the left side of the bus.

NASDPTS officials said that the data collected in the national survey helps in raising public awareness about illegal passing of school buses, making policy changes and targeting violators — all with the goal of increasing student safety.

“We know that students are far safer in school buses, but when they are outside the bus, they are more vulnerable to injury or death,” NASDPTS President Leon Langley said in an article. “Any driver who passes a stopped school bus illegally is endangering children and possibly even his or her own future.

Trying to save a few seconds by passing a school bus and hitting a child can be devastating not only for the victims and their families, but also for the motorist who will have to live with the sad consequences.”

Many school districts in the golden triangle have steps to cut down on stop-arm violations, such as enacting stiffer penalties, launching law enforcement campaigns, and passing legislation to allow stop-arm cameras on school buses.

If you ever travel down Texas Avenue before and after school you will always notice a Bridge City Patrol unit monitoring School Bus traffic.

The danger of illegal passing of school buses is also emphasized by national data compiled annually by the Texas State Department of Education. The latest version of that report found that six students were killed by vehicles passing their school bus in the 2013-14 school year.

Always remember it could be your kid, grandkid, or relative catching that yellow school bus to get their proper education so let’s not let our hurries cost them their future.

Most of all Orange County Schools resumed Monday, January 8, 2018.

Man dies, woman hospitalized from injuries from one vehicle wreck

To The Leader At approximately 5 a.m., the Texas Department of a Public Safety (DPS) responded to a one vehicle crash... read more