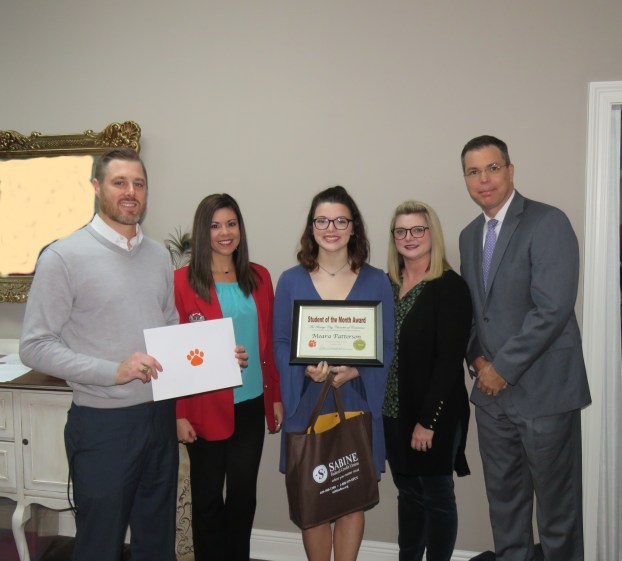 Meara is the daughter of Stephen and Candi Patterson. She has a GPA of 4.58 and is ranked 10 of 104. Meara’s awards and honors include:

Meara’s clubs and organizations include:

Mrs. Trawhon, Activities Coordinator, said, “Meara is gracious, kind, and willing to lend a hand when needed. Meara does not like to be front and center, which is ironic because as a lifelong dancer and captain of the Orangefield High School Drill Team for two years, she has been exactly that: front and center! Meara’s poise and communication skills come natural, which is why she earned the position of drill team captain as an 11th grader. She most certainly deserves the honor of Student of the Month. Meara has sharpened her leadership capacity through Rotary Youth Leadership Awards (RYLA) weekend, sponsored by the Bridge City-Orangefield Rotary Club and Texas Bluebonnet Girls State sponsored by American Legion Auxiliary Unit 049 in Orange. She represents Orange County well. In addition to Meara’s leadership, her spirit shines as she dances. Meara is brave and confident, and for the reasons above, I’m confident that she will be successful in any adventure in which she embarks. God bless you, Meara!”

Mr. Chevelier, English 4 teacher, said, “Meara Patterson is a sweet, inspiring young woman whose strong work ethic is a model for her peers.”

Mrs. Oregel, Calculus teacher, said, “Meara is one of the most caring students I have had. She helps others when she can. Meara works really hard in class, she asks great qustions. I look forward to see her grow in Calculus.”

After graduation, Meara plans to attend college in the fall at the University of Tennessee or American Music and Dramatic Arts College and will pursue a degree in nutrition with a minor in dance.

TARKINGTON — The Bridge City Cardinals went on the road and snagged a big 49-27 non-district win over the Tarkington... read more