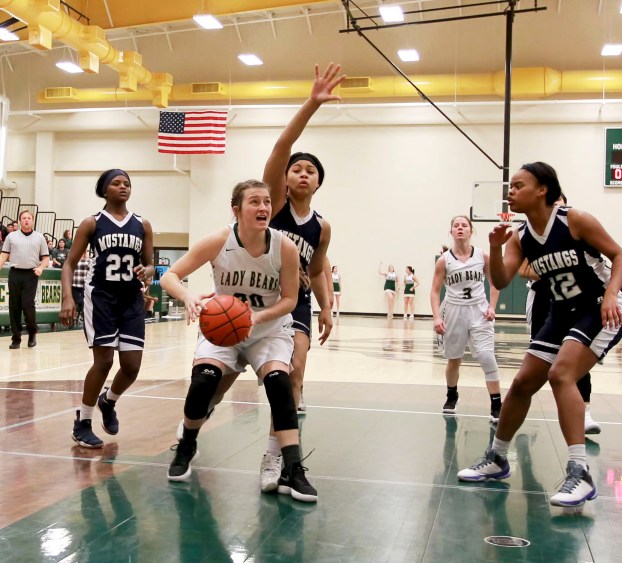 Leader Photo by Mark Pachuca LC-M's Jacie Miller (20) goes to the basket for two of her 14 points against WO-S Tuesday night.

LITTLE CYPRESS — Offense was tough to come by Tuesday night at The Grove at Little Cypress-Mauriceville High School but the LC-M Lady Bears had just enough at the end to down the West Orange-Stark lady Mustangs 36-35 to improve to 2-0 on the young District 22-4A season.

The game was tight most of the way.

The Lady Bears had the night’s biggest lead at 30-23 in the third period only to see the Lady Mustangs (0-2 in district) score the quarter’s last eight points to take a 31-30 edge.

Neither team could find any touch with their shots, especially the final quarter in which the Lady Bears outscored the Lady Mustangs 6-4.

Aspen Harper and Zaria Johnson scored a field goal each to give the Lady Bears a 34-31 edge in the final stanza.

The Lady Mustangs battled back as B’Jne Arvie trimmed it to 34-33 and Lady Mustang Alissa Brown tied it at 35-35 with just under a minute left with a baseline jumper.

The Lady Mustangs had one last gasp as Gabby Tims’ desperation three-point attempt fell just short at the buzzer.

The Lady Mustangs made 14 field goals on the night compared to LC-M’s nine but the Lady Bears did most of their damage from the free-throw line as they connected on 18-of-33 from the charity stripe while the Lady Mustangs converted just 6-of-15.

The teams combined for 101 rebounds as they were chasing down a slew of missed shots throughout the night.

Jacie Miller had a double-double for the Lady Bears, scoring a game-high 14 points while yaking down 10 rebounds. Brielle Butler and Zaria Johnson each had five points and six rebounds for the Lady Bears. LC-M guard Chelsea Perry ripped down a game-high 15 rebounds while teammates Rogers had seven boards and Genesis Barclay had five.

Point guard Diamond Judge paced the WO-S arsenal with a double-double of her own as she had 13 points, 12 coming in the first half, and 11 rebounds.

The game was tied 8-8 at the end of the first period as WO-S had four field goals, two by Judge, while LC-M had all of its points from the free-throw line.

Miller bruised her way inside for eight points in the second quarter for the Lady Bears as they were able to snag a 22-17 edge until Judge, who also had eight points in the period, drained a three-point bomb to trim the LC-M lead to 22-20 at the half.

The Lady Bears went up 30-23 midway through the third after a bucket by Butler but the Lady Mustangs finished with the nice spurt to grab the lead as Johnson tallied five of the eight points.

WO-S finished with 20 turnovers while the Lady Bears had 17.

The Lady Bears will look to continue their winning ways when they visit Bridge City Friday while the Lady Mustangs will seek their first 22-4A win with a home date against Hamshire-Fannett.