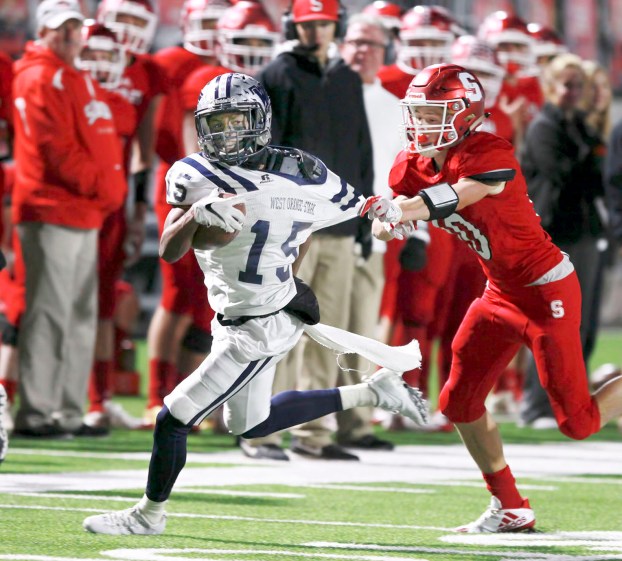 Leader Photo by Mark Pachuca WO-S' Jarron Morris (15) sheds a tackle against Salado. Morris is the MVP of the 2017 All-Leader Football Team after another huge season on offense, defense and special teams.

What a high school football campaign in was in 2017.

When Orange County football teams look back upon the season, they will remember it vividly.

They will recall Hurricane Harvey disrupting so many things as several schools across the area were belted with flood waters as school calendar year got off to a very late start.

They will remember most of the teams losing at least two non-district games (Orangefield lost three) due to the storm as most teams did not start until Sept. 15.

But most of all, the West Orange-Stark Class 4A Division II state runnerup team will be remembered the most.

This Mustang crew were what many called “wet behind the ears” when the season started. Making a fourth straight appearance in the State Championship Game was going to be a tall task for the Mustangs and head Coach Cornel Thompson and Co.

After all, WO-S basically had to replace 17 starters off a State Champion 2016 unit that was full of seniors. That class had 13 players sign college scholarships and was one of the most dominating teams to ever suit up in Class 4A, outscoring opponents 811-69 in the process.

So what did this past season’s team do? They won with just true grit and hustle, becoming one of the most overachieving and well-coached teams ever.

As the season progressed, so did the Mustangs. WO-S took opponents’ best shots, especially in the postseason, but they passed with flying colors, winning 13 straight games and helped extend what turned out to be a 40-game winning streak until running into a big, physical senior-oriented, experienced Pleasant Grove group in the title game.

This Mustang senior group, although a small one, will definitely remember their high school days as each year they attended WO-S High School, the Mustangs were in the State Championship Game.

The Mustangs were part of four Orange County teams that made the postseason.

The Orangefield Bobcats, despite getting off to such a late start and fighting off a few tough injuries, battled their way into the postseason for the fifth straight season for Coach Josh Smalley.

The Little Cypress-Mauriceville Bears punched in their playoff ticket for the fourth time under Coach Randy Crouch’s direction.

The Vidor Pirates, who suffered so much through Harvey’s wrath, recovered to make the playoffs with a 8-3 mark for Coach Jeff Mathews.

It was a tough season for the Bridge City Cardinals. After winning District 10-4A Division I in 2016, Coach Dewayne DuBois’ Redbirds were besieged with major injuries on both sides of the ball, especially with their strong stable of running backs and will look to bounce back in 2018.

Of course, all great football seasons must come to an end and another strong one will start next season as all of our teams will be looking to make improvements.

So, we can now wrap up the year with the 2017 All-Orange Leader Football Team as so many players deserve accolades for producing a tremendous season.

Before getting to “The Team” special thanks need to go out to a wonderful crew that had every single game covered this year.

Correspondent writers Caleb Adams and Dennis Sedtal were on hand to put together excellent stories on Friday nights.

Then there were our photographers in Mark Pachuca and Joey Dupuy, who brought us excellent game shots and fan shots throughout the season. I would stack their work with anybody and that duo would come out on top.

So, without further ado, here is the 2017 All-Orange Leader Team:

MOST VALUABLE PLAYER: JARRON MORRIS, WO-S: It would be tough to find someone that did more for his team than Morris. Morris, who had a solid sophomore campaign and erupted in 2016 as a junior, very seldom left the field for the Mustangs during his senior year . Whether he was defended passes in the secondary, hauling in passes as a receiver or being one of the most dangerous return men in Southeast Texas, Morris simply got it done. Defensively, he led the Mustangs in interceptions and passes defended as very seldom did opposing quarterbacks look his way. On offense, he was the Mustangs’ leading receiver with 24 catches for 336 yards and five TDs. Although teams tried to kick away from him in the return game, Morris still brought both a kickoff and a punt back for scores last season. The Texas State commit averaged 27.2 on kickoff returns and 15.9 on punt returns.

OFFENSIVE MVP: CHAKA WATSON, WO-S: Nobody probably felt more pressure than this young man, but the senior quarterback rose up and was a tremendous leader that came up big in the clutch in numerous games, especially in the playoffs. Watson definitely held his own in replacing three-year starter Jack Dallas as he showed improvement throughout the year and poise when it counted the most. Watson had a big year finding the end zone. He completed 97-of-171 passes for 1,189 yards and 12 touchdowns. He was heavily involved in a stout Mustang running game as well as he gobbled up 817 yards and 18 TDs on 142 carries.

DEFENSIV MVP: DAVIEN TEATE, WO-S: For many fans, Teate flew under the radar the last couple seasons but he was usually “Davien on the Spot” when he came to tackling the opposition. He was never necessarily known for his flair, Teate just simply got the job done from his linebacker spot and made play after play according to Coach Thompson. Teate was the leading tackler on Class 4A’s top-ranked defensive unit with close to 170 stops on the season as he powered a defensive unit that allowed just 11.4 points a game and 191.5 yards a contest.

NEWCOMER OF THE YEAR: ETHAN MCCOLLUM, LC-M: The sophomore quarterback proved his might throughout the campaign in leading the Battlin’ Bears back to the postseason. He was so key in the Bears’ three District 10-4A wins thaty netted them the third-place playoff berth and had LC-M in the district title hunt up to the final week of the regular season. McCollum, like WO-S’ Watson, got it done with his legs as well as his arm. He passed for 1,130 yards and rushed for 785 and will definitely look forward to making those numbers rise up even more in 2018.

COACH OF THE YEAR: CORNEL THOMPSON, WO-S: The numbers simply don’t lie, but Coach Thompson and staff, perhaps, put together one of the best coaching jobs in recent memory to get the Mustangs back to the state title tilt for the fourth straight season. In the last four seasons, the Mustangs have compiled a 57-5 (.919 winning percentage. In each of Thompson’s seven years in leading the program, the Mustangs have advanced to at least the 4A Region III Finals. Thompson has compiled a 91-12 (.883) mark in his head-coaching tenure.

SABINE PASS — The Orangefield Bobcats found their offensive groove Tuesday as they ran past Sabine Pass 82-57 at Sharks... read more