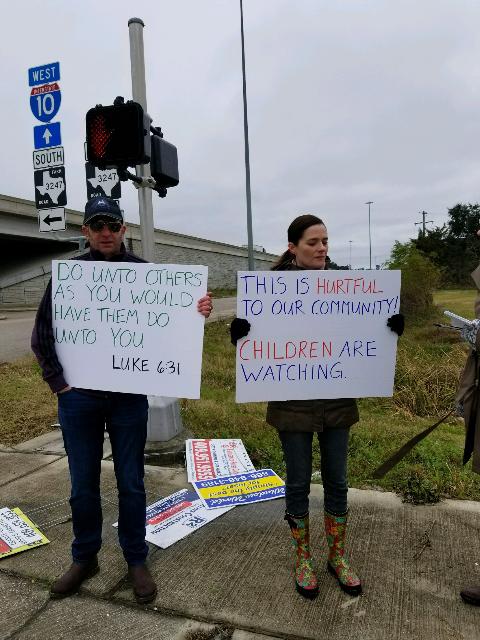 Courtesy photo Jeremy, left, and Tracie Parzen, on Wednesday, protests against the construction of the Sons of the Confederate Veterans Memorial in Orange.

While the Confederate Veterans Memorial stands idle at the corner of Martin Luther King Drive and Interstate 10 in Orange, residents held a protest on Wednesday speaking out against the park.

Concerns from recent negative publicity concerning Orange, inspired the organization of the protest as people were holding signs against the memorial from 11 a.m. – 1 p.m. on Wednesday in temperatures of approximately 40 degrees and misting rains.

“In 2017, it is insane to be in the process of constructing this memorial on MLK. We are starting to see this is not right,” Louis Ackerman said. “We do not want to erase history, we want to learn from our mistakes.”

Current and former residents are concerned the monument could prove to be hurtful to the community.

“My wife, Tracie, is from Orange and we spend a lot of time in Orange,” Jeremy Parzen of Houston said. “We want to bring awareness to it.”

While the group of individuals did receive some disapproving looks from passerbys, they also had people giving the thumbs up sign or waving as they passed.

“We had one challenger,” Parzen said. “He was very polite. We had another who asked us about it. He disagreed with the memorial and was polite about it.”

Parzen said another event was in the planning stages and in conjunction with the South East Texas Progressives.

“I was glad to be out there today in the freezing cold,” Parzen said.

“I wanted to bring awareness,” Parzen said. “A lot of people disagree with the monument. People spoke out against it and we wanted to keep the issue alive.”

She added the monument has hurt many.

“We want them to have a voice as well,” Parzen said. “My sign said ‘Children are watching’ because we want the children to see and speak out. Their voices will be heard and not everyone is OK with this [memorial].”

For her, the protest shows not everyone in Orange is in agreement with the memorial and disagrees with the message.

A permit was issued January 16, 2013 by the City of Orange for the Confederate Memorial of the Wind, which will display 26 Confederate flags visible form the Interstate, under construction at the intersection of Interstate 10 and Martin Luther King, Jr. Drive.

The City of Orange sent the Sons of Confederate Veterans, owners of the property, a letter dated April 9, 2013, concerning the lack of sufficient parking for the location in Orange. The city requested the group add two additional American Disabilities Act handicap parking spaces and eight additional parking spaces, according to a previously published Orange Leader article.

The city also offered to buy the property from the group in the same letter.

The letter stated it is not denying or suspending the current permit.

The city has the right to request changes to existing building permits.

Sons of Confederate Veterans (SCV) are direct heirs of the soldiers who fought in the Civil War 1861-1865.

SCV was established in 1896 in Richmond, Virginia as a result of the veterans themselves were dying off.

A sub-division is called a camp. There are 60-70 camps across Texas with approximately 2,600 members. There are 30,000 active members nationwide.