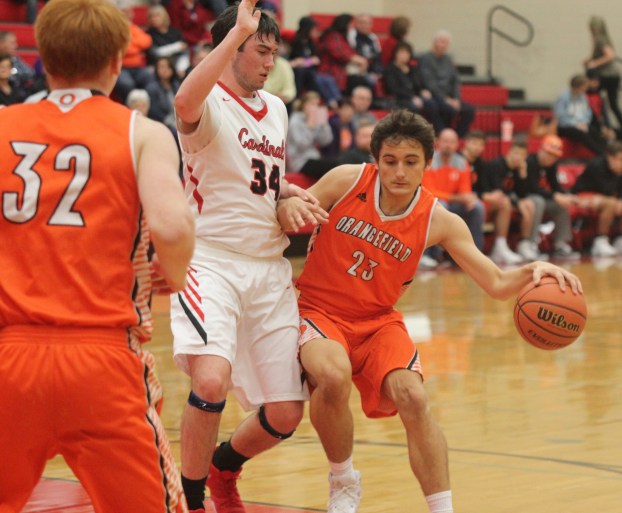 BRIDGE CITY – Playing stout defense throughout the tournament, the Port Neches-Groves Indians captured the Bridge City Cardinal Classic by taking down District 22-5A rival Vidor as they downed the Pirates 44-37 in the Championship Game Friday.

The game was tight throughout but the Indians had the answer at the end as they were able to expand a two-point cushion to 44-37 to eventually hold off the Pirates.

Drake Rojas, who had a solid all-around tournament, paced the PN-G attack with 15 points.

In the third-place game, the Orangefield Bobcats fought off the host and short-handed Bridge City Cardinals 44-40.

The Bobcats led by 10 at intermission and led by as much as 37-24 before the Cardinals staged a furious late rally.

Cardinal post Hunter Wiegreffe lifted the Cardinals up with a double-double as he powered his way inside for 14 points and yanked down 11 rebounds.

Coy Bryant had seven points, including six on two three-pointers while Caleb Honeycutt and Grant Boudreaux each added six points.

The Cardinals were without the services of starting guards Chason Burch and Max Baker. Burch, who played Thursday, was out with an illness while Baker was on a football trip.

Orangefield stretched its lead to 37-24 in the third quarter but the Cardinals rallied to trim it to 37-32 at the end after a big three-pointer from Bryant.

The Bobcats were able to hold the Cardinals at bay in the fourth period with the free-throw shooting making a big difference throughout the game.

The Bobcats finished 14-of-19 from the charity stripe while the Cardinals converted just 5-of-15.

Bridge City finished with a 24-23 rebounding edge. The Cardinals had 18 turnovers while the Bobcats had 14.

The Cardinals fell to PN-G 48-34 earlier Friday morning while the Bobcats dropped a 47-32 decision to Vidor.

The Cardinals were cold from the field throughout their game with the Indians.

PN-G snared a 22-11 lead early in the second quarter and controlled the game the rest of the way.

Hunter Curtis paced the Indians arsenal with 16 points, 10 of them coming in the first half as the Indians led 26-18 at intermission.

Drake Rojas and Tracy Smith combined for 10 points in the third quarter to help the Indians stretch their lead to 38-22.

Rojas finished with 13 points while Smith had 12 points and six rebounds. Curtis and Trent Lee had five boards apiece for PN-G.

PN-G finished with a 22-13 rebounding advantage. The Cardinals had 22 turnovers and the Indians 16. Bridge City was 6-of-10 from the free-throw line while the Indians were 5-of-6.

The Bobcats were cold as well from the field in their loss to the Pirates.

Bears fall to Granbury in a tight one in Fredericksburg Tournament

On Thursday, the Little Cypress-Mauriceville Bears dropped their first game, falling to Granbury in a tight one, 63-60 after winning... read more