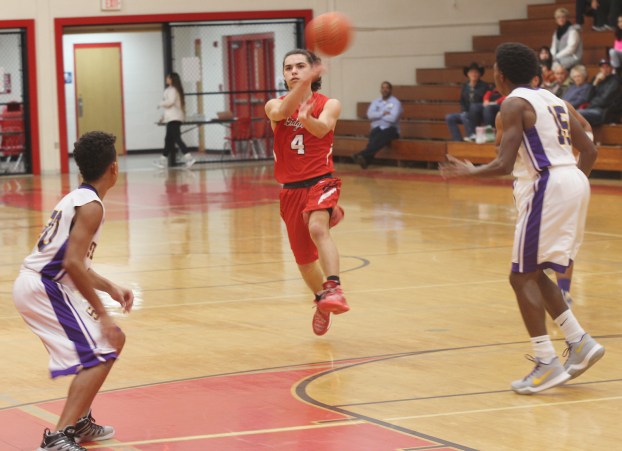 BRIDGE CITY — Both the Bridge City Çardinals and Orangefield Bobcats nabbed wins in the afternoon at the Cardinal Classic Thursday.

The Cardinals beat the Sabine Pass Sharks 77-62 in a shootout of a game, on day one of the Cardinal Classic.

After winning their first game over Anahuac 63-23, the Bridge City Cardinals enter game two of the day looking to feel good about day two.

The two starting guards for Bridge City, Caleb Honeycutt and Chason Burch, who led the Cardinals with 17 points, were constant pests for the Sharks on the defensive side forcing turnovers and converting points on them.

The Cardinals took an early and big lead in the first quarter, as Honeycutt led the team with seven points. The Sharks defense couldn’t rotate fast enough to keep up with the quick pace of the Cardinals.

Bridge City had a commanding 30-12 lead at the end of the first quarter.

However, the Sharks, led by sharp-shooter Dylan Sam, whittled away at the lead as they cut it to 43-38 at the half.

Sam fired in a game-high 38 points.

The Cardinals kept the lead in the third but by just one. The Cardinals lead 54-53 with Kolten Weeks leading the way with the team just dishing him the ball down low. Weeks had six points in the third and had 13 for the game.

The Cardinals took a 10-point lead with a minute left in the game, which all but put a bow on top.

The Bobcats came into their second game for them on the day looking to go 2-0 and feel solid heading into day two after they defeated Evadale 56-47 early Thursday morning.

The Bobcats would keep the temp and only allow three points in the final quarter. Catt kept up his ways throughout the game and lead the team in scoring with 27 in the game.

Aven Lathrop fired in 13 points for the Bobcats and had seven rebounds while Catt added six boards.

There will be a three-point contest at the high school gym at 11:40 a.m.

At 12:40 p.m. the fourth-place teams from each pool will play at the junior high while the third-place pool teams will be at the high school.

BRIDGE CITY – Both the Orangefield Bobcats and Bridge City Cardinals snagged a pair of early morning wins at the... read more