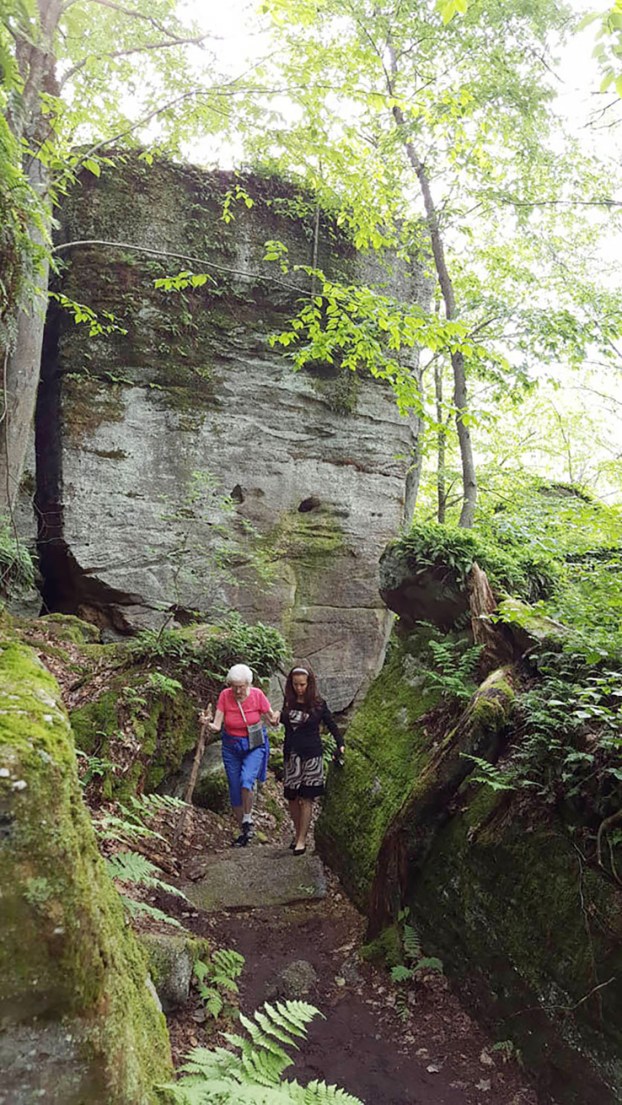 Courtesy Photo Betty Walden, 87, walks Olean’s historic Rock City Park trail during her visit to the area. Park owners believe she is one of the oldest hikers to complete the three-quarters of a mile trek.

EDITOR’S NOTE: Betty Francis Walden is a former First Grade Teacher at Little Cypress Elementary School. She taught at LCE in the early to mid 1970s as many former LCE students should remember her fondly.

OLEAN – Eight-seven-year old Betty Walden Francis’ recent hike along the dips and curves of Rock City Park’s historic trail could have worn out many younger seniors.

Add her recent visit to Watkins Glen and Letchworth Park, as well as her float down the Allegheny River and viewing of Olean’s fireworks, and it could be said that Walden has more energy than some middle-aged people.

A resident near Houston, Texas, Walden stayed in the Olean area this past week while visiting the family of Michael Walsh, a native of Olean.

Walsh, also of the Houston area, served as a police officer for 30 years in that community before retirement. He and his wife, Nora, met Walden through their church in Texas about eight months ago.

“She was sitting in a pew that was saved for somebody else,” he recalled. “When she got up, my wife invited her to sit with us, and she’s been sitting with us ever since.”

Walsh said Walden was invited to travel with them to the Olean area the last week of June to visit his mother, Betty Kameck, 80, a former drapery seamstress.

“My mom and Betty did (Rock City) trail together,” said Walsh.

He said Walden also walked in Letchworth State Park in Castile and Watkins Glen State Park, floated down the Allegheny River and watched the Bradner Stadium fireworks from Adams Street.

For her part, Walden said she enjoyed Rock City because it was different than any trails she has encountered.

“Michael had me stand where I was on one rock and I put my hands up like I was holding a big rock up. That was kind of fun,” she said.

Dale and Cindy Smith, who own the historic Rock City Park on Route 16 South in the town of Olean, said there have been a number of older people who have walked the trail. Dale Smith, believes Walden, however, is one of the older individuals to complete the trail.

He said the trail is three-quarters of a mile long and winds through gigantic rock formations with steep steps as it circles back to the visitors’ center and gift shop.

“It really is a pretty good workout,” Dale Smith said of the trail. “If somebody moves right along, it takes about 40, 45 or 50 minutes.

“Over the last few days we’ve had some people in their 80s go through and walk the entire trail,” he remarked. “I always marvel at that – my gosh, when I was a kid, people 80 years old were gone.”

Walden said at Rock City she was “tired, but I was OK.”

“When we went to Watkins Glen, my legs felt very weak…but I didn’t have to go to bed after returning home,” she said.

A former elementary teacher, Walden is twice-widowed and has two children and three grand-children. She has visited New York state in the past, but this is her first trip to the Twin Tier area.

“Teaching school was much easier than climbing,” she kidded. “I taught 26 years, mostly first grade, I loved my babies.”

Walden said her personal exercise regimen includes a one-mile jaunt in the morning and a mile in the evening every day in the Houston area.

“I have a funny dog that’s kind of hyper, and I say he needs to walk, but I do too,” she shared.

She believes her regular walking routine has helped her overall health, stamina and longevity.

“You couldn’t tell it yesterday, because I still needed help,” she admitted. “But I’m getting stronger again.”

To The Leader On Friday, December 15, Lamar State College – Orange held commencement ceremonies for Fall 2017 at the... read more