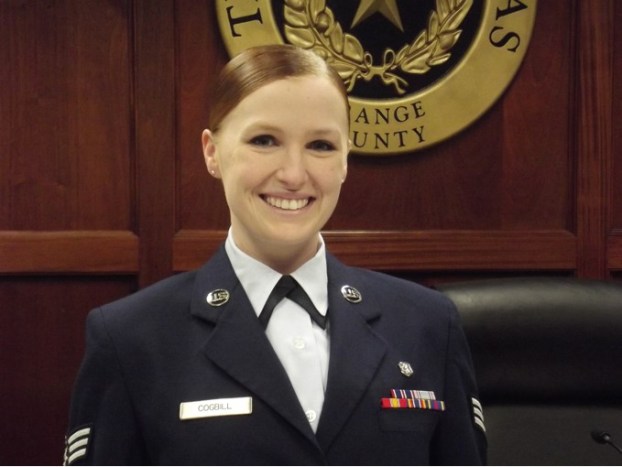 A highlight of the Orange County Commissioners Court meeting, held Tuesday afternoon, was honoring U.S. Air Force Senior Airman Katie Mae Cogbill of Orange who enlisted in 2014. She was honored by the court for her hard work and dedication to the Air Force – having received the 19th Airlift Wing Airman of the Year Award on January 27, 2017.

On December 14, 2017, Congressman Brian Babin rose before the 115th U.S. Congress to celebrate her prestigious military award and for her “selfless service to our great nation”.

The congressional record reflects Babin’s remarks, “Airman Cogbill exemplifies all that is right with our people of today and is an example of the great accomplishments one can achieve with determination and dedication.”

Cogbill graduated from Bridge City High School and then married her husband, Daniel. The birth of their son, Barrett, brought with it a diagnosis of autism which led Cogbill to join the US Air Force, a decision born of “her love, tenacity and dedication to her family,” Babin remarked on the floor of the House of Representatives.

“Today, Cogbill serves with the 19th Medical Operations Squadron at Little Rock Air Force Base where she works as an Aerospace Medical Services Technician and is responsible for the patients of the Women’s Health Clinic,” states the Congressional record. “Katie’s Air Force career is impressive and she has received several awards and recognition for her work ethic and dedication to her patients. Her most impressive and recent award was the 2017 Air Force Medical Service Aerospace Medical Technician of the Year for Air Medical Command, coined by 19th MDG Commander, Colonel Dawn Brooks.”

Airman of the Year is an award few achieve. Only one is selected and Cogbill fits the bill. Not only must the airman perform their duties at a high level of skill, accomplishment and passion, they must continue to pass each level of training in their field.

Cogbill not only met but exceeded each challenge and goes beyond the call of duty as a volunteer for horseback riding therapy for wounded warriors.

In an Air Force news article published March 17, 2017 by Senior Airman Mercedes Taylor, 19th Airlift Wing Public Affairs, Cogbill said, “My family and I went from sleeping on a friend’s couch and floor just a few years ago to where we don’t have to worry about keeping the lights on or buying groceries.”

Cogbill said, “I joined the Air Force to be able to better care for my family. I have wanted to do nothing else but be the best that I can ever be to ensure that they are cared for.”

Her current rank is Senior Airman however within a short while Cogbill is set to receive a promotion to Staff Sergeant but her goals don’t stop there.

“I want to attend the two-year Nurse Enlisted Commissioning Program,” Cogbill said. “After graduation I will be an officer and a nurse in the Air Force. I have completed four-years and I have just recently reenlisted for an additional six. I am making the Air Force my career.”

According to available sources those selected for the program attend college full-time at an accredited college while remaining on active duty and upon graduation attain a bachelor’s degree and an officer’s commission.

Orange County honors the achievements of Senior Airman Cogbill in service to a grateful nation. She is a credit to herself, the Air Force, her Squadron, and the State of Texas. Foremost it is the depth of her self-sacrifice, dedication, and devotion to family which drives her to succeed. Godspeed Senior Airman Katie Mae Cogbill, and to all who may follow her shining example.