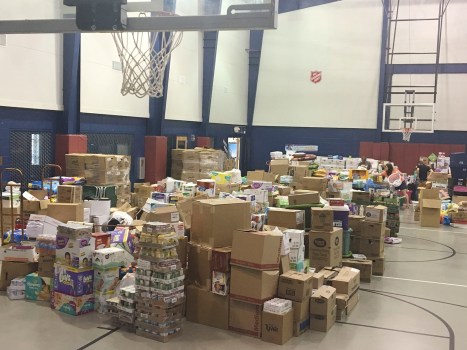 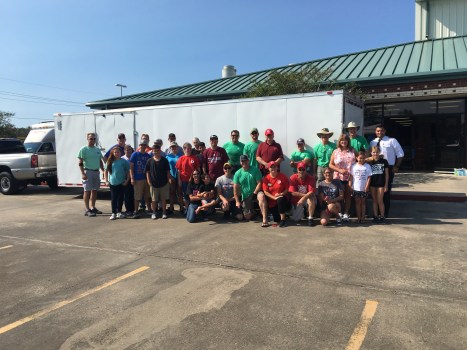 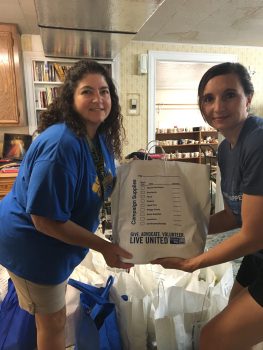 “We are very grateful to all of the many individuals, organizations, and businesses who contributed in helping Orange County with the immediate needs after Harvey” said Maureen McAllister, President and CEO for United Way of Orange County.

The Kiwanis Club sent over $4,000 in supplies. Gary and Jim from the Kiwanis Club in Lake Kiowa, Florida delivered these items. John, a Kiwanis member from Florida and his son drove another truckload of supplies. These shipments were coordinated by Richardson, Texas Kiwanis Club member Marshall Kregel and locally by Orange Golden K Kiwanis member Karen McKinney. There were also civic organizations from afar which worked together to support Orange County. Buddy Williams, a Rotary member from Florida, drove with Len Stapleton to deliver additional recovery supplies to Orange County. They had an eventful trip (multiple tire blowouts and other memorable moments), but said that nothing was going to stop them from providing help.

Businesses also had a caring spirit. Planet Fitness locations in Louisiana, including Lake Charles, Sulphur, Alexandria, Monroe, West Monroe and others offered collection boxes. A couple of their staff members drove over a U-Haul full of items to help those in need. Auto dealerships also got in on the action. Jimmy Britt Chevrolet in Greensboro, Georgia worked with Granger Chevrolet in Orange to coordinate supplies and provide them to United Way of Orange County so that items could be given to agencies for distribution to individuals.

While some of the donations came from services organizations and businesses, and some started a bit smaller. Take Jonna Sells from Ohio for example. She saw the news that showed the catastrophic flooding that impacted the Texas coast. She wanted to help. She figured that larger cities like Houston would receive an outpouring of assistance, so she looked for a smaller community – and she found Orange County. She planned to send a box of relief supplies.
She posted on social media to see if anyone else in her area had some things that could go with her shipment. And then it grew! Thousands of dollars later, over 80 hours of sorting, boxing, and labeling, and a semi-truck came to Orange. Thanks to Jonna Sells and the good folks of Huber Heights, Ohio, including Mike Sells Potato Chips, Wal-Mart, Engage City Church, Tim Hart’s I70 Paintball for the generous donation.

St. Landry-Evangeline United Way of Opelousas, Louisiana “adopted” United Way of Orange County. Just days after the storm, United Ways of Texas helped these two local United Ways connect. The Opelousas area had been impacted by devastating floods in 2016, and their United Way knew that Orange County would have a great need in the days, weeks, and months to come. They wanted to help! Since then, they have brought over multiple truckloads of supplies, including cases of water, cleaning supplies, clothes, and more. They reached out to their community for assistance. One of the local Catholic schools began a month-long collection. Each week, they asked for something different – cleaning supplies, school supplies, etc. The donation drive was so successful, the school delivered the items themselves and brought them right here to Orange’s Catholic School, St. Mary’s. St. Landry-Evangeline United Way has not only provided Orange with countless donations, they have also been a great resource to United Way of Orange County. They have also been through a flood and have some great tips to share. Raising Canes partners with them on a regular basis.   To help with Harvey, they had a team deliver some of these supplies.

United Way of Orange County was not only the point of contact for many supply donations in Orange County, but they also helped coordinated services to our area. Bill Eldridge, with The Nashville Rescue Mission brought a team here the first week of September to remove trees and limbs to help homeowners. Locally, also in early September, Complete Staffing and the Calcasieu Parish Sheriff’s Office provided 100 hot jambalaya/green bean meals for those who were still without electricity or those in need.

Storm recovery has many phases. The first phase was immediate need. This provided local citizens with food, water, and other essentials immediately after the storm when residents did not have electricity, restaurants were closed, and stores were not open. The thousands and thousands of dollars of disaster supplies were stored at a warehouse space donated by local business man Ross Smith and distributed by United Way of Orange County’s Partner Agencies, The Salvation Army and Friends Helping Friends. The need has since shifted to unmet needs and will soon be long term recovery.

Disaster recovery is a long process, but it’s most effective when we all work together. “The outpouring of support from so many all over the country has been amazing. Not only did these people provide us with desperately need supplies, they provided us with hope.
Their spirit of caring will never be forgotten. They truly demonstrate what it means to #LIVEUNITED.” Maureen McAllister, United Way of Orange County