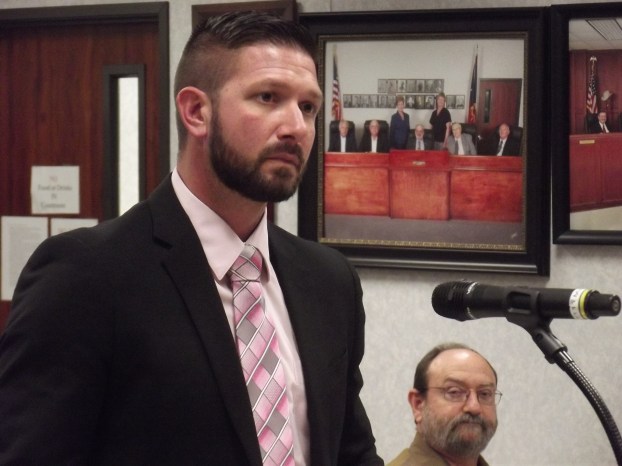 Ralph Valenciano, Emergency Management Coordinator addressed the Orange County Commissioners Court at their regular session, on Tuesday afternoon, regarding the current status of debris pickup in the county.

Valenciano said, “We have recorded 354 thousand cubic yards of debris picked up. We are approximately 95 percent complete county wide.”

Commissioner John Gothia expressed support for the work Valenciano and the contractors are doing and replied some citizens are, “just now able to muck out their homes.   I am getting calls regarding original debris piles still not having been picked up.”

Commissioner Jody Trump said he has also been getting calls and has recently visited a home with an original pile on the side of the road.

“We encourage citizens if they have yet to do any demo work on the inside of their homes,” Valenciano said. “To give us a call and let us know that, and we will address that on a case by case basis. But at some point, Commissioner, we have got to stop.”

Addressing the court Valenciano said, “It’s incredibly compassionate but it is also difficult to understand how 77 days into a debris mission we still have homes that have yet to be mucked out. So we want to handle those on a case by case basis.”

Commissioner Johnny Trahan said, “These people have been devastated. A ray of hope is having their debris out of their house. To shut them down now is not the right way to go.”

Gothia followed up asking Valenciano, “What do we do to pick up original debris at homes? The (Emergency Management) hot line (409-745-9809) says no pick up after November 26. What are we going to tell them?”

Valenciano responded by saying he believes the best course of action is for citizens to call the hot line and provide as much detail as possible and to ensure the word is spread that only original homestead debris will be reviewed on a case by case basis, “but the November 26 deadline should remain.”

Commissioner Barry Burton said, “We should be clear on this, no new construction or remodeling debris is going to be picked up. Folks can take it to the county landfill, still open Monday through Friday without a fee for the time being.”

Judge Stephen Brint Carlton weighed into the discussion and asked, “What does a ‘case by case’ basis mean?”

After much further discussion with Valenciano and Commissioners it was agreed to provide a press release and modify the hot line message to reflect that homestead debris by the home owner (not investors or commercial interests) will be considered for pickup however, the homeowner must call the hot line. If sufficient detail is provided, Valenciano’s office and the debris hauler contractor will review the homeowner’s request and will make a decision based on the facts of that particular situation.

Gothia clarified for the court, “We are talking about freshly mucked out house debris. That’s what we will look at. We want to make sure we are taking care of our citizens. Even if we are down to five debris hauler trucks, I want to use those five trucks until the job is done.”

Valenciano and the court agreed.

It was agreed the landfill hours with no fee as well as original homestead debris pickup (on a case by case basis) on private property and right of way is extended until January 14, 2018. After that date there will no longer be debris pick up at all by the county.

Valenciano said, “Nothing is automatic now. There aren’t debris haulers driving the streets looking for pick up.”

“Citizens must call in,” said Carlton with Burton and Trahan wanting it to be clear that no new construction or remodeling debris will be picked up.

Those items should be taken by the homeowner or contractor to the landfill.

Citizens are encouraged to call the Emergency Management Hot Line: 409-745-9809 with their requests for pick up.   The commissioners court unanimously agreed citizens could also call them directly however the most efficient and direct means is to call the hot line as soon as possible, keeping in mind the hard stop deadline in January.

At the conclusion of Valenciano’s address to commissioners court, the court enthusiastically praised and supported the work Valenciano and the Emergency Management Department has been doing.

Orangefield ISD would like to thank Chevron Phillips Chemical Company LP for their generous donation of $10,000 to the Orangefield... read more