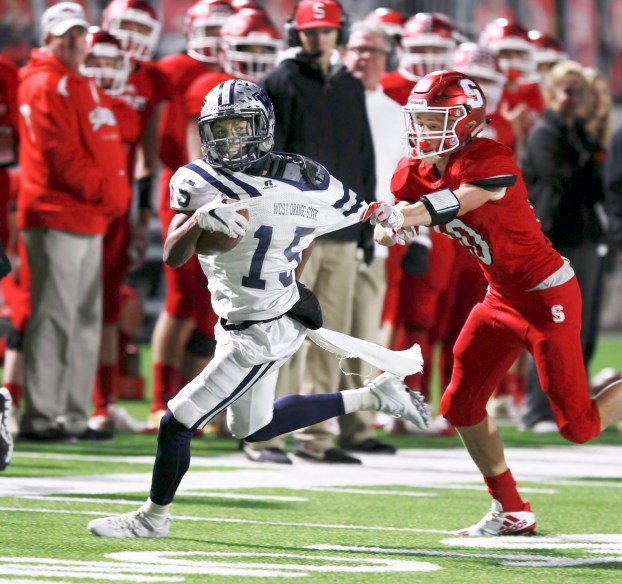 Mustangs readying for for tall semifinal test against Texans

WEST ORANGE — Only one team stands in the way from the West Orange-Stark Mustangs making their fourth straight Class 4A Division II State Championship appearance.

And it will be a program that put up more points in a game against the Mustang program in its history.

The two-time defending 4A Division II state champion Mustangs will look to make some noise again come Friday night when they take on the Wimberley Texans at 7:30 p.m. at Katy’s Legacy Stadium in the 4A Division II State Semifinals.

It was the Texans that defeated the Mustangs 52-29 in 2005 in the same round as Wimberley went on to claim the state title that season.

The Texans (13-1) are coming off an impressive come-from-behind win against previously undefeated Cuero last week. They trailed Cuero 36-24 in the fourth quarter before rallying for a 44-36 victory for Coach Doug Warren and Co.

Meanwhile, the Mustangs (12-0) extended their state-leading winning streak to a whopping 39 games by shutting out the Salado Eagles 14-0 in the Region III Finals. It marked the 16th shutout during the magical 39-game streak and also marked the 16th straight playoff victory as well.

“Only four teams left standing in our division and divisions across the state, so that means we’re a pretty darn good football team,” said Mustang coach Cornel Thompson. “We’ve got a tough battle coming Friday against an excellent Wimberley club. I was telling people way back when the season started that the Wimberley Texans would be a sleeper and here they are. Coach Warren has done a super job with them and we haven’t played anyone of their caliber for sure this year.”

The Texans, District 13-4A Division II champions, have piled up a ton of points with their wide-open offense that runs multiple formations based out of the cobra set. Their only loss came at the hands of Boerne 40-28 in their sixth game.

Sparked by standout quarterback Jordan Weeks, their prolific offense is putting up 488 yards a game, 302.9 in the air and 185.1 on the ground.

“They can flat-out put some points on the board,” said Thompson. “We have not seen this type of offense in awhile. They are similar to the Waco Robinson team we played last year in the second round, but Wimberley is way more explosive and plays much better on defense.”

“He’s the best one we’ve seen in a long time,” said Thompson. “The PN-G kid (Roschon) Johnson was the best we’ve seen thus far and it was a scrimmage. The Weeks kid doesn’t have the legs like Johnson, but he doesn’t worry about being a dual threat, he’ll cut you up with his arm. He lays the ball in there perfectly and throws it deep really well. He doesn’t beat himself, he’ll throw it away instead of risking a turnover. Hopefully we can put a little pressure on him.”

“Their receivers are top-notch,” said Thompson. “The Stoever kid runs precise routes and is a superb slot receiver. Martinez, the split end, can go deep on you in a hurry and so can the Mann kid. We will have our hands full in the secondary.”

The Texans also have a standout in the backfield as running back Thomas Carruthers has rumbled for 1,506 yards and 22 TDs on 168 totes and has also caught 19 passes for 208 yards and a score.

“Carruthers is their workhorse,” said Thompson. “He really opens up their passing game by averaging about nine yards per carry. He’s tough to bottle up. That whole offensive unit is talented, so we’re going to have to be mentally ready to go to work.”

Coach Thompson was impressed with the Texans’ offensive line and how they protect the quarterback led by a stout center in Daniel Gafford along with Hunter Moore and Heath Schake.

Of course, the Texans will not have faced a defense the caliber of the Mustangs either as WO-S has allowed just 8.2 points a game.

The Mustangs are only allowing a mere 162.3 yards a game, 98.3 on the ground and just 63.9 in the air. Opponents have averaged just 3.1 yards a carry and opposing quarterbacks have completed just 62-of-140 passes and nine interceptions.

“We were able to shut down a good Salado team last week and we’re going to have to raise the bar even higher against Wimbereley,” said Thompson. “Defensively, we’ve been solid. But we’ve got to go out and be mentally prepared in all three phases of the game. Against Madisonville, it was our special teams that struggled. Against Salado, we struggled blocking their defense and we let too many possible points slip away. We’ve got to play all three phases well come Friday or it could be a tough night. When you reach this level, you have too.”

Tailback Kayven Cooper, who has played so well on both sides of the ball, leads the ground arsenal with 1,054 yards and 18 TDs on 140 totes. Watson has zipped for 580 yards and 16 TDs on 113 carries and back Justin Sibley has roamed for 516 yards and five TDs on 71 carries.

Jarron Morris has 20 receptions for 245 yards and four scores and remains a dangerous return man. Kaleb Ramsey, Mark Thibodeaux and Blake Robinson have teamed up for 46 receptions for 479 yards and two scores.

The Texans run a base 50 defense most of the time and like to blitz and run a lot of stunts. It is a defense that has bent at times but never seldom breaks as they give up an average of 20.7 points on the season.

Cuero quarterback Drew Riemenschneider passed for 292 yards and two TDs against the Texans last week while back Jared Love gained 148 yards on 15 carries and scored a pair of TDs.

“They will come at you defensively,” said Thompson. “We’ve really seen a lot out of the (Kaden) Kowalski and (Matt) Mitchell kids at linebacker. Carruthers goes both ways and is a good linebacker and so does Stoever in the secondary.”

Coach Thompson remembers the 2005 loss to Wimberley well but that it should have no effect on the one coming up Friday.

“This is a totally different Wimberley football team,” said Thompson. “Their 2005 group liked running it right up your throat and made you like it. This Wimberley version likes to wear you out with the passing game. The only thing I will tell the kids about that 2005 loss is that we were not totally mentally focused going in and it was tough. We gave up four turnovers in that one and it got away from us early. The good thing about our group is that we have not turned the ball over, which has been great.”

Houston Texans Quarterback T.J. Yates (2) through for 2 touch downs and had 3 carry’s for 31 yards. After coming... read more