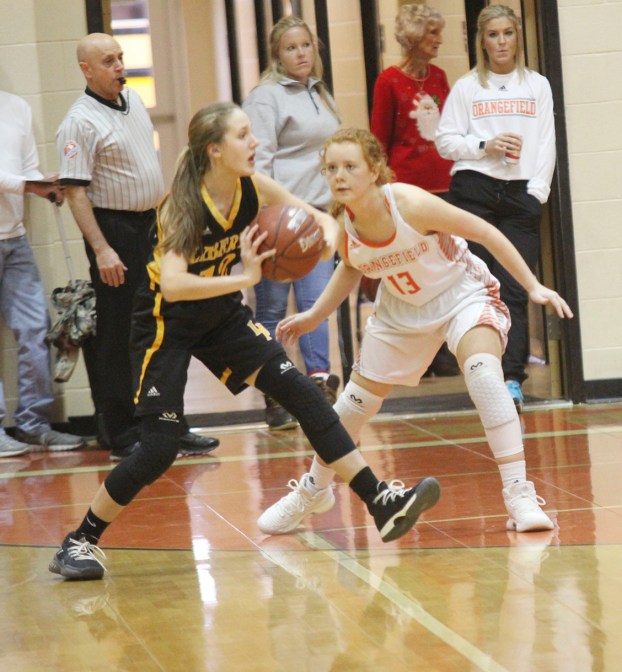 ORANGEFIELD — Pressuring the Liberty Lady Panthers from start to finish, the Orangefield Lady Bobcats rolled to a convincing 58-30 victory in the first game of the Tennison Tournament they are hosting Thursday.

The Lady Bobcats forced the Lady Panthers into 34 turnovers and they went on a 14-0 spurt to start the second quarter as they strolled to an easy win.

Lady Bobcat post Cameron Choate bruised her way inside for a big double-double as she tallied a game-high 18 points and yanked down a game-high 11 rebounds.

The Lady Bobcats led 14-9 at the end of the first period as Fregia tallied nine of her points in the quarter while Choate added a pair of buckets.

Orangefield then ripped off the next 14 points to start the second period. Choate muscled her way inside for six points while Garlington roamed the paint for four points. Simmons had the only points in the period for Liberty by burying a late-three-pointer as the Lady Bobcats led 28-12 at intermission.

The Lady Bobcats went on a 18-6 run in the third period as Choate scored eight points in the period and Lummus and Deutsch added four apiece as Orangefield stretched its lead to 46-18.

ORANGEFIELD — Playing at the pace they liked, the Orangefield Bobcats edged out the Woodville Eagles 34-30 in their first... read more