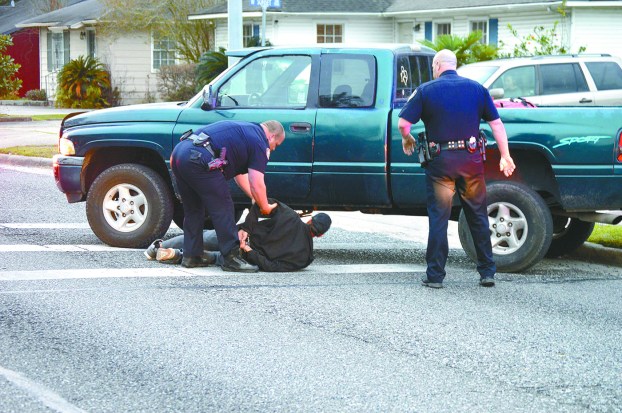 Sunday afternoon around 5 p.m. the driver of a Dodge pickup truck caused a two vehicle crash at the intersection of Strickland and MacArthur, but failed to stop and render aid.

According to a witness on the scene, she observed the driver take off from the accident and she chased the driver all the way down MacArthur then to 16th Street. The driver then turned down 14th Street going into Sunset addition. The witness was able to stay on the phone with police and give the dispatcher their locations.

Orange Police Officer J. Roy was finally able to catch up to the drivers, but  the driver of the pickup truck attempted to turn away from the officer as he activated his emergency lights. The driver then continued Southbound on 16th but left the roadway and drove a short distance down the sidewalk with his hands out of the truck claiming he had no brakes. The driver finally was able to get his vehicle to stop at the corner of 16th and Sunset where he was taken into custody by police.

Grace Lutheran Church (LCMS) at 2300 Eddleman Road will be serving hot dog meals at 5:30 p.m. on Wednesday’s in... read more