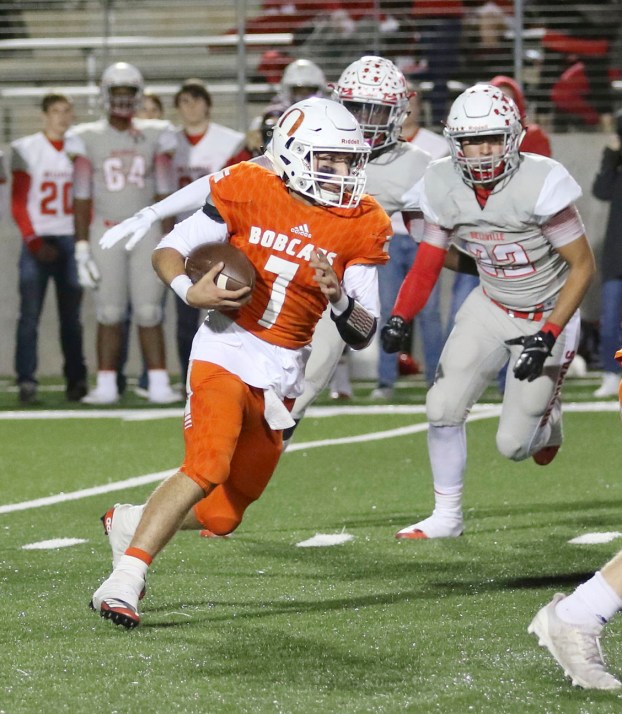 ‘Bobcat Country’ excited about the move down to Class 3A

After toiling for years as one of the smallest Class 4A schools in the state, the Orangefield athletic program got a big boost Wednesday as the Bobcats found out they will be one of the “big boys on the block”.

The Bobcat programs will now participate in Class 3A in all academics and sports after battling it out with so many larger schools in Class 4A in recent years.

The University Interscholastic League released the Conference cutoff numbers Wednesday morning and preliminary enrollment figures for the 2018-2020 reclassification and realignment.

Class 3A high school enrollments are now set at 225-504 and Orangefield turned in 499 to slip into 3A by five students.

“I’m so excited for our kids, not just in sports but academics as well,” said Orangefield Athletic Director and head football coach Josh Smalley. “We feel the kids really competed so hard against larger schools over the years despite fighting the numbers game, now we feel like we’re more on an even playing ground. Honestly, we thought we would barely be in 4A but we’ll certainly take it.”

The new district realignments will come on Feb. 5 and the Bobcats will likely find themselves playing some of their “old” rivals again that will bring back a ton of memories.

“It’s going to make a lot of people happy to rekindle some of those old rivalries,” said Smalley. “There could be several different scenarios on who could be in the district. But it would fire up some of the old alumni if we play folks like Buna, Kirbyville, Woodville, East Chambers, we’ll just wait and see. Our big deal, if that happens, is finding non-district games in football because we play Buna, Kirbyville and Woodville already.”

Gone will be the district football games against state power West Orange-Stark and basketball and baseball and track battles against Silsbee, Little Cypress-Mauriceville and Bridge City.

“By no means dropping down to 3A will be a walk in the park,” said Smalley. “We have tremendous respect for all the schools we could be facing that have excellent traditions in a lot of sports and we know and respect so many coaches on those staffs we’ll face and have known a lot of them for years and hopefully those relationships will grow. It’s certainly going to put a little more pressure on us now to win for sure, but we know the kids are thrilled and they’re going to work really hard. It’s going to be interesting and exciting for sure.”

In other changes, Lumberton will make the move from Class 5A to Class 4A as the Raiders will look to be more competitive in a lower classification.

Class 5A football will be divided into Division I and Division II next season.

Port Arthur Memorial will be the only Southeast Texas school to stay in Division I while Nederland, Port Neches-Groves, Vidor, Beaumont Central and Beaumont Ozen will be in Division I. That means PAM will be hitting the road towards the Houston area for their district games and will likely end their two-year rivalries with PN-G and Nederland.

1A – 5A Football Division I and Division II Numbers

PORT NECHES — For the second time in less than a week, the Port Neches-Groves Indians toppled the Bridge City... read more