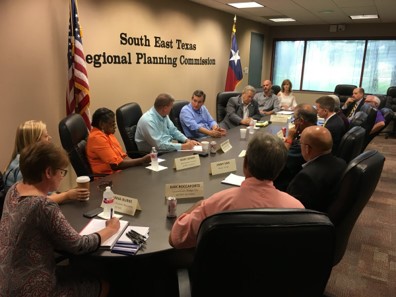 Courtesy photo Judge Carlton and Commissioner Burton along with others met with Senator Ted Cruz to discuss Harvey recovery efforts and Cruz explained tax relief during this period.

Qualifying businesses will be eligible to receive a $5,000 grant to assist with Hurricane Harvey recovery efforts on a first come basis.

Commissioner Jody Crump said, “This is a snooze, you lose proposition.”

Hill clarified, “The first 40 applications will be reviewed for eligibility. Additional applications received after the first 40 will be placed on a waiting list pending availability of subsequent funding.”

Applications will be available for download on October 11, 2017 at www.orangecountyedc.com/harvey-disaster-recovery/.

Senator Cruz pledged his support and continuing efforts to make the process of recovery on a federal level as smooth as possible and to reduce or eliminate red-tape that impedes progress.

Carlton said he believes the meeting was a productive one and will continue to engage with State and Federal officials on issues related to making progress with recovery efforts in Orange County.