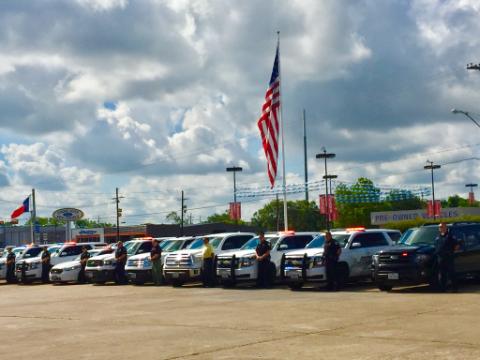 Courtesy photo Local law enforcement officers gathered for a moment of silence on Friday, the one year anniversary of the attack on Dallas law enforcement.

Law enforcement officers from the City of Orange Police Department and other surrounding towns gathered, at 10 a.m. Friday, at the corner of 16th Street and MacArthur Drive in the compass bank parking lot to stand with law enforcement on the one year anniversary of the attack on Dallas law enforcement. Friday was also the funeral for San Antonio Police Officer Miguel Moreno, who was shot and killed in the line of duty last week.

Governor Greg Abbott issued a statewide call to stand with law enforcement, on Thursday, asking all Texas law enforcement officers to turn on their red and blue lights for one-minute on Friday, July 7, at 10 a.m.

Additionally, on Friday, Governor Abbott was attending and spoke at the funeral of San Antonio Police Officer Miguel Moreno, who was shot and killed in the line of duty last week.

“Respect for our law enforcement officials must be restored in this nation,” Abbott said. “It is our officers who stand between us and all that threatens, and we must stand behind them by sending a clear message that attacks on our men and women in blue will not be tolerated. I ask that all Texans come together to show our appreciation for those who keep us safe.”

Motorcyclist injured in wreck on Monday