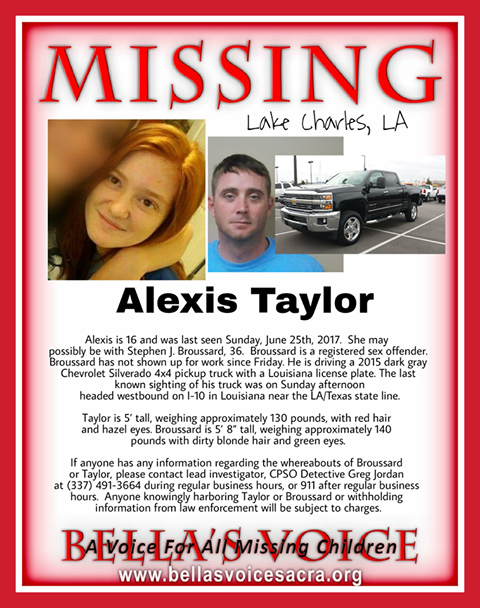 Lake Charles, LA – Sunday, June 25 the Calcasieu Parish Sheriff’s Office received a call in the afternoon regarding a 16 year old girl who had left home around noon and had not returned. The family’s attempts to contact her were unsuccessful.

The investigation revealed Alexis Paige Taylor, 16, Lake Charles, may possibly be with Stephen J. Broussard, 36, from Vinton but had most recently been living in Sulphur, who she has supposedly been meeting up with for the past month.

It was also learned Broussard has not shown up for work since Friday.  He is driving a 2015 dark gray Chevrolet Silverado 4×4 pickup truck with a Louisiana license plate.  The last known sighting of his truck was on Sunday afternoon headed westbound on I-10 in Louisiana near the LA/Texas state line.

A warrant has been issued for Broussard’s arrest for contributing to the delinquency of a juvenile and additional charges are likely.

If anyone has any information regarding the whereabouts of Broussard or Taylor, please contact lead investigator, CPSO Detective Greg Jordan at (337) 491-3664 during regular business hours, or 911 after regular business hours.  Anyone knowingly harboring Taylor or Broussard or withholding information from law enforcement will be subject to charges.