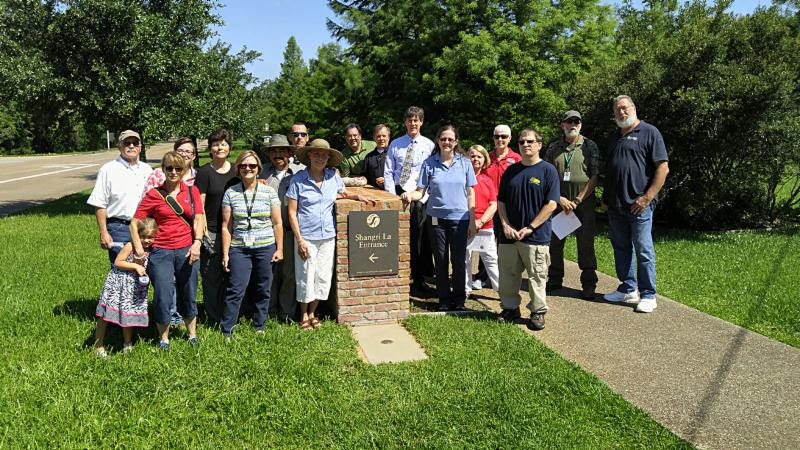 On Wednesday, June 7, 2017, a group of colleagues and friends gathered to dedicate a National Geodetic Survey monument in honor of the memory, educational commitment, and life of Michael Hoke, first Managing Director of Shangri La Botanical Gardens and Nature Center. The geodetic survey monument was donated by several of Michael Hoke’s colleagues at the National Oceanic and Atmospheric Administration (NOAA), Lamar University, and the JASON Project of Southeast Texas with whom he worked for many years in numerous science programs dedicated to inspiring students to broaden their understanding of science and the environment.

These survey monuments are objects placed to mark key survey points on the Earth’s surface and usually numbered. They are most frequently used by land surveyors to accurately identify locations and elevations for purposes of construction, boundaries, etc. Official geodetic survey monuments are registered in the National Geodetic Survey Database through detailed GPS coordinate triangulation which is then submitted for review and approval. The geodetic survey monument is typically accurate globally to less than 1 inch!

In addition to the “Michael Hoke” monument, Shangri La Gardens staff has added a card to the Field Trip App to provide more details about Michael Hoke and the survey monument in his honor. The Field Trip App allows visitors to enjoy a detailed virtual tour of Shangri La Botanical Gardens and Nature Center utilizing this GPS-driven application.

Shangri La Gardens Director, Rick J. Lewandowski notes, “Michael Hoke dedicated his adult life to preserving nature and teaching generations of students to be kind to their world. Until his death, Mr. Hoke continued to teach all who met him the importance of making the world a better place through the many science programs and collaborations he conducted in Southeast Texas. We may have lost Michael Hoke, but this wonderful gift given by his friends and colleagues will remind future generations of his total commitment to his community.”