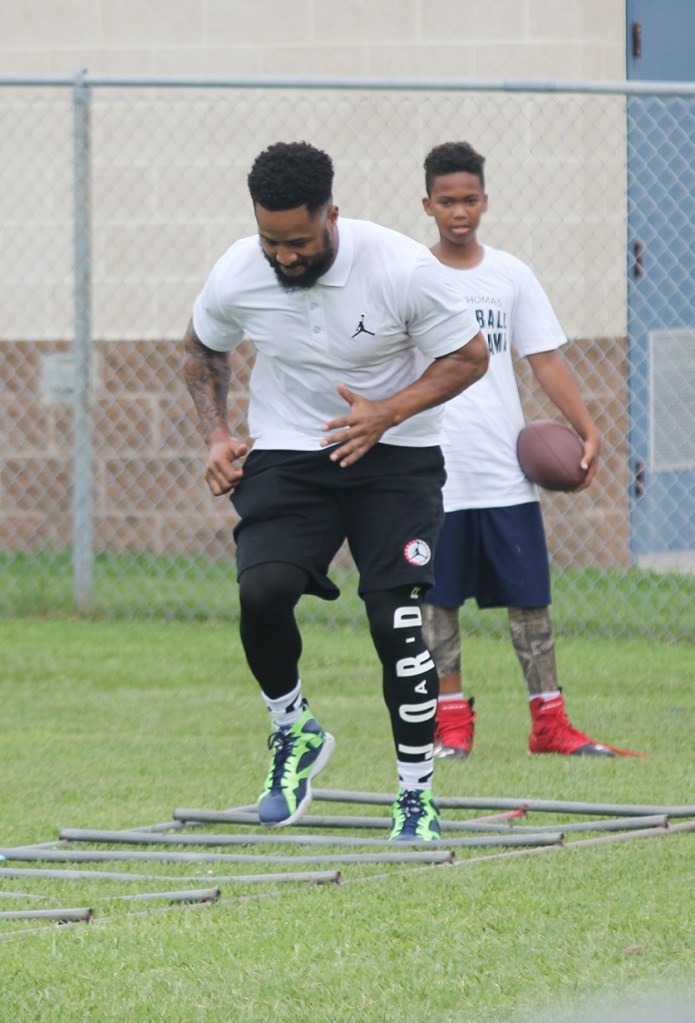 Leader Photo by Caleb Adams Earl Thomas shows campers how to go through the ropes at the Earl Thomas Football Camp Friday at WO-S High School.

WEST ORANGE — With focused faces and sweat pouring off of them, close to 700 campers strong were participating in the sixth year of the Earl Thomas III Football Camp Friday at West Orange-Stark High School.

The kids were able to take part of a great event, taking part in various drills while getting a great opportunity to getting input and direction from several National Football League Players.

And then there is that opportunity to get a chance to be in a photo or in a conversation with Thomas, a native of Orange and former Mustang and All-American at the University of Texas and Super Bowl champion safety from the Seattle Seahawks in Thomas.

“Every time I come back here, it’s like I never left,” said Thomas. “This will always be home for me. To get this much support for this camp every year is simply amazing.”

NFL players, along with former Mustang football standouts have volunteered their time to make sure the camp is a success year-in and year-out.

“I appreciate all the volunteers that make it all happen and they’re all so dedicated to helping the kids out,” said Thomas. “What’s even more special is to see those bright-eyed smiles on all the kids’ faces. It’s so worth it just to see that.”

Earl gets plenty of help from not only his Seahawks teammates and other NFL players, but from the community and especially his family as well.
His mother Debbie and family have a lot to do with the camp’s success. Debbie spends countless hours finalizing signups, organizing registrations and making sure everything from t-shirts to meals and gift bags are ready to go.

“I’m so excited that Earl comes back and brings back such excitement to this community,” said Debbie Thomas. “A lot of these kids would never have the opportunity to go to a camp like this because of the cost. Earl wants to give back to the community and he doesn’t charge and never will.”

No question about it, Debbie Thomas stays extremely busy helping to organize the camp in every form.

“We put a lot of effort into it, and all of the volunteers and support we’ve had over the years has been just so delightful, “said Debbie Thomas. “It’s so worth it and it just gets more fun every year.”

WO-S head football coach Cornel Thompson, who has led the Mustangs to back-to-back Class 4A Division II state titles and three straight trips to the state title game, who coached Thomas during his time as a Mustang loves what Thomas brings on and off the field.

“He constantly is giving back to his hometown,” said Thompson. “It’s tremendous what he brings back to the community. Everybody’s an Earl Thomas fan. He makes such a lasting impression on everyone that is involved with him.”

“It’s amazing the number of volunteers he brings into this camp every year,” Thompson said. “The amount of work that goes into this is just incredible, but they get it done. He’s never turned anybody away from his camp who wants to participate. He’s put Orange, Texas on the map and he’s proud to be from Orange. “A lot of these youngsters at the camp, who come up to say hi to me or shake my hand, aspire to be athletes of some type, whether its football, basketball or baseball or whatever sport,” he added. “And they see Earl doing the things he does, like coming back to Orange to do this camp every year. That makes an impression on them.”

The Thomas Camp can give a person chills just from how from how it always starts.
One of the camp director’s Derrick Scott gets it going with a question to all the campers.
HARD WORK?
PAYS OFF answers the big groupof young athletes, who all sporting Thomas Camp T-shirts.

Orange Mayor Jimmy Sims and West Orange Mayor Roy McDonald both were on had to thank Thomas for putting together such a wonderful camp along with WO-S Superintendant Rickie Harris.

“It’s so great to be back home and support Earl at his camp,” said Locks. “Earl has done so much in his career but he always knows where his home is. He’s so humble in everything that he does and makes us all so proud. To see the smiles light up on these kids’ faces is worth it every single year. I feel so blessed to be a part of this for six straight years.”

Thomas, who was a All-State player for WO-S, is now a five-time Pro Bowl safety for the Seahawks and has played in two Super Bowls in the last four seasons. Seattle won the 2014 Super Bowl by downing Denver and the Seahawks were nipped by the New England Patriots in 2015.
Many fans from around the area remember the numbers Thomas posted as a Mustang. He played not only defensive back but receiver and running back as well as a three-year starter.
He recorded 112 tackles and 11 interceptions as a Mustang. He had two kickoff returns for touchdowns and two punt returns for touchdowns. He also had 1,850 rushing yards and 2,140 yards receiving.
Thomas was also All-District in basketball and baseball and was a State Track participant on excellent WO-S track squads. He was also the 2006 Orange Leader Male Athlete of the Year.