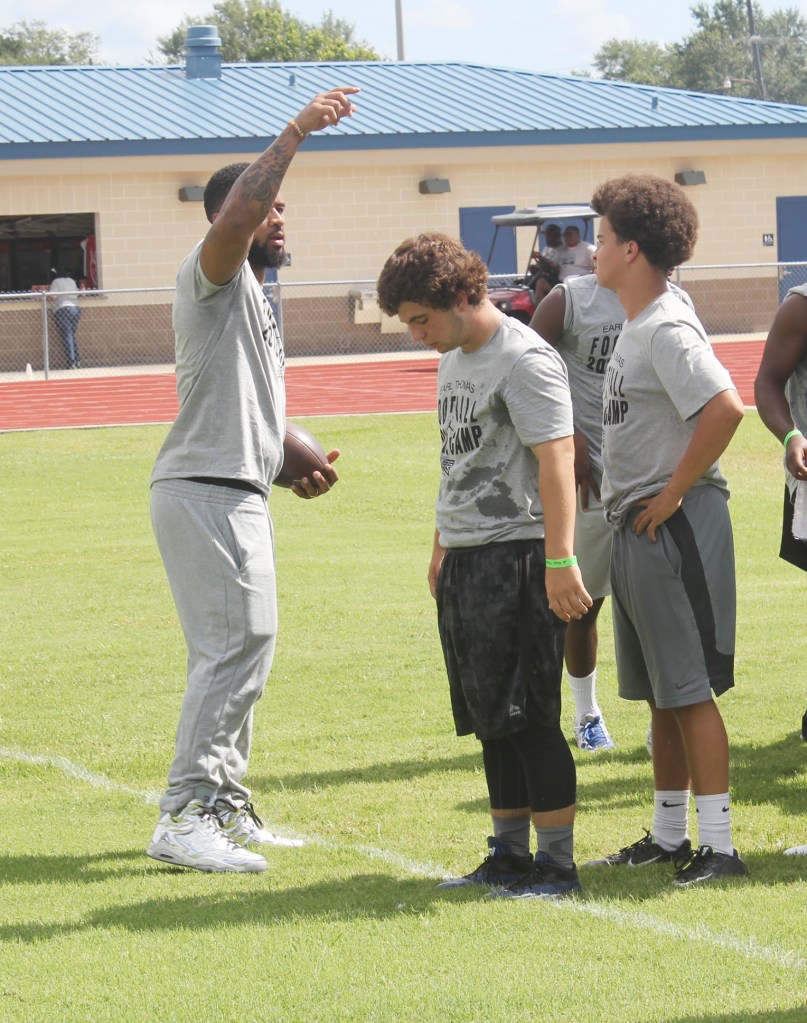 It’s that time of the year again as a slew of Southeast Texas kids will converge to West Orange-Stark High School for the Earl Thomas Football Camp Friday and Saturday at Dan Hooks Stadium from 8 a.m.-noon.
Although the majority of youngsters participating in the football camp reside in the local area, a great many of participants traveled great distances to be here. Some youth came were reported to have come from northern Louisiana and Arkansas to be here, as well as a bunch from the Houston area.
Campers should report Friday morning at 7:30 a.m. The T-shirt pickup originally scheduled for Thursday as been canceled as the WO-S school district will be closed due to possible heavy rains.
The Thomas Camp can give a person chills just from how from how it always starts.
One of the camp directors Derrick Scott gets it going with a question to all the campers.
HARD WORK?
PAYS OFF answers the 1,000 kids, who are sporting T-shirts that has Thomas’ No. 29 on their backs.
HARD WORK?
PAYS OFF!
Then the campers chant together, CAMP ET, CAMP ET, CAMP ET!
Thomas, the All-Pro Seattle Seahawks safety and University of Texas All-American will be just one of several National Football League players to help direct the camp, which is an amazing success as kids from all across Southeast Texas region will be attending.
Thomas, who was a All-State player for WO-S, is now a five-time Pro Bowl safety for the Seahawks and has played in the Super Bowl in the 2014 and 2015 seasons. Seattle won the 2014 Super Bowl by downing Denver and the Seahawks were nipped by the New England Patriots in 2015.
Many fans from around the area remember the numbers Thomas posted as a Mustang. He played not only defensive back but receiver and running back as well as a three-year starter.
He recorded 112 tackles and 11 interceptions as a Mustang. He had two kickoff returns for touchdowns and two punt returns for touchdowns. He also had 1,850 rushing yards and 2,140 yards receiving.
Thomas was also All-District in basketball and baseball and was a State Track participant on excellent WO-S track squads. He was also the 2006 Orange Leader Male Athlete of the Year.
Thomas returns to where he got his football life roaring in the right direction, providing a free football camp for the kids of his hometown and the region.
Earl gets plenty of help from not only his Seahawks teammates and other NFL players, but from the community and especially his family as well.
His mother Debbie and father Earl Thomas, Jr. have a lot to do with the camp’s success. Debbie spends countless hours finalizing signups, organizing registrations and making sure everything from t-shirts to meals and gift bags are ready to go.
“I’m so excited that Earl comes back and brings back such excitement to this community,” said Debbie Thomas. “A lot of these kids would never have the opportunity to go to a camp like this because of the cost. Earl wants to give back to the community and he doesn’t charge and never will.”
It’s fun to see NFL players from around the league help Earl out and put those gleaming smiles on kids faces. They teach the kids plenty about football and even more importantly, life lessons that will only help the kiddos down the road. They constantly talk to the kids about staying on the right track, having positive attitudes and taking care of business in the classroom.
The campers are always sorted by age and are spread across four different fields. Thomas makes his way to each one of them throughout the course of a day.
On the final day of camp, there is a highly competitive 7-on-7 tournament featuring former high school and college players. Many of the young campers stick around to watch.