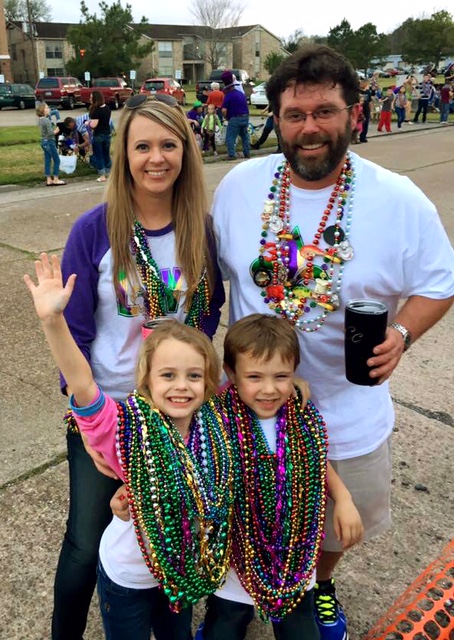 Courtesy photo Breelyn Lemarie, front left, Keller Claybar support a number of beads collected during the 2017 Mardi Gras Parade in Orange with the help of Sabrina Lemarie, left back, and David Claybar, owner of The Old Orange Cafe. David and Sabrina are engaged to wed in April 2018.

A father, a son, a brother, a chef, a restaurant owner, a storm rescuer, a cook for hundreds in a hurricane, and a member of one of Orange’s long-time families sums up one local man, David C. Claybar.

He proudly answers to “Daddy” from son, Keller, who will be 6-years-old on Sept. 1. He soon will be stepdad to Breelyn, who will be 8-years-old on Aug. 27, when he marries her mom, Sabrina Lemaire of Orange, originally of Port Neches, in April 2018.   Both children currently attend Little Cypress Elementary. Sabrina works as a bookkeeper for the local Reliable Cleaners. Both are looking forward to blending their families.

Reared in Orange, Claybar said, “I followed my grandmother and my mom around the kitchen because I was interested in cooking. I also did some competitive cooking in college.”

Claybar received his B.S. in Business from Sam Houston State University, an Associate’s in English from Blinn College, as well as an Associate’s degree in Culinary Arts from the Art Institute of Houston in 2003. His passion was cooking.

Claybar is best known locally for his restaurant he bought in January 2004, The Old Orange Café on Division Street. He took ownership of the café from Susan and Terry Childers, now Jasper residents, who had opened the eatery in 1990. He classifies his cooking to be one of Cajun Creole influence, as that is what his mother cooked mostly.   Included among favorites to cook are gumbo, etouffee, and jambalaya. Chef David keeps busy in his café with inventories, employees, and keeping the public happy. Spare time finds him fishing and hunting!

Claybar hails from a long line of public servants. His brother, Lannie, recently retired from the City of Orange Police Department, and now works for the Orange County Sheriff’s Office, while his grandfather, also Lannie, started Claybar Funeral Homes in Orange in 1946.

Later, his uncle and father, F. David, took charge of the funeral homes after their dad passed in 1969. David’s father is now retired from the funeral home business but also worked for both Orange County and Acadian Ambulance Services, and trained paramedics at a special school for many years. His mother, Peggy Stringer Claybar, is a surgical nurse at St. Mary’s Christus Hospital in Port Arthur.

David’s uncle is William Brown Claybar, former mayor of Orange. Pictures of family from long ago fill the walls of The Old Orange Café, a one-time dairy.

Hurricane Ike in 2008 churned trouble on Chef David, as he had his café filled with water and inoperable for weeks. He went with his brother and other police officers, launching boats at 10th and John to rescue and ferry isolated citizens the day of Ike.

He set-up a feeding station at the National Guard Armory on Meeks Road, first serving spaghetti to 250 people, but he and a team of 10 soon moved to the Little Cypress Junior High School campus due to a larger facility. Claybar worked 18 hours per day serving three daily meals to about 250 or more for 18 days.

“It was very trying to rebuild my business and serve the community, but it all worked out,” Claybar said.

When asked with whom he might wish to dine, Claybar replied, “Chef Paul Prudhomme, owner of K Paul’s Restaurant in New Orleans, the man who invented blackened redfish.”

“I am not a fan of being in the spotlight, so I would not want to be anyone else but me,” Claybar added when asked who he would like to be.